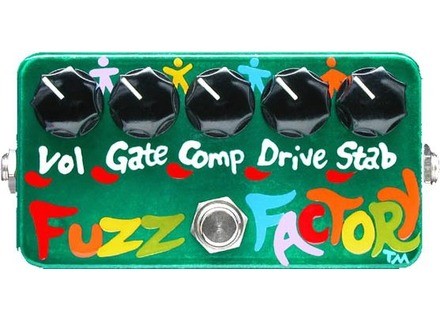 View other reviews for this product:
It's a fuzz pedals.
format is relatively small.
Genre boss pedals but thinner.

There is a small manual that provides some configurations of knobs.
Comprhension the influence of some knobs asked me quite some time.
It is simple to use, it supports diverse it with his foot ....
In fact if you use it as a fuzz pedals is that I defines a thanks to its knobs, I play with and that's it.
It is rather unfortunate ....
See below why.

The effect of fuzz is really terrible. In little more tweaking.
The knob "stab" Defines a certain stability of the effect.
It's really hard to explain because it is a sound ever heard.
SETTING THE following the knob that, when you lock the strings of the guitar, this one gnre feedback. Ms. trs low volume. Then you can modulate the level of feedback. You CRER a kind of whammy, feedback.
Listen to the song muse "new born" APRS keyboard is the sound you hear.

I've had three months, I rgale.
In order to use against the modulation must turn the stab.
So I spend my time on the floor. I installed a switch on the footswitch instead.
I fix the fuzz on my guitar. And have fun.
The pedals can not be found in France.
States only.
See the source
Did you find this review helpful?yesno