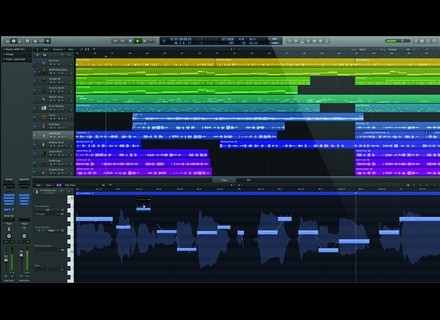 View other reviews for this product:
- Were there any compatibility issues?
Not at all, it worked straight away with any audio interface I've ever plugged into the mac. Logic Pro X doesn't like the 32bits plugins anymore, though, so if you have many of them it might not be your best choice for a DAW (unless you want to use stuff like jbridge... personally I like to keep things simple).

- Is the general configuration/setup simple?
Very. All you have to do is download it from the AppStore. The main package is pretty small, and if you want to use the extra stuff (wich is a lot) it asks you to download it separately as soon as you click on a preset or open a project that needs something you didn't install yet. But in my opinion the best you can do is just go to the 'download additional content' menu, click on everything and let it sort things out, so you don't have to even think about it anymore.

- Is the manual clear and sufficient?
- Are the typical functions easily accessible?
To be honest, I've never read the manual. This is a good thing.

- For how long have you been using it?
Almost a year, already!

- Does the software work correctly in this configuration?
- Is this configuration (software and gear) stable?
Works really well, never had any problem with interfaces or plugins (I don't use many third party plugins, actually, but anyway...).

- What performance are you getting? (if quantifiable)
I'm on a mac book air - the cheapest one, 2014 i5 1.4Ghz, 4gb RAM - and it runs smoothly here, even with around 40 tracks on a project and many plugins on tracks and buses and etc. So far I didn't have to freeze tracks or anything to be able to work. I've even tried opening a project from an external USB 3.0 drive, with no problems at all.

- What thing do you like most/least about it?
I make soudntracks for videogames, so what I like the most is definitely the sound library and it's hundreds and hundreds of loops, all the presets, and stuff like 'drummer' that Logic has. Its always easy to quickly get an idea from your head to the computer, and give it some polishment later by tweaking what the presets already gave you.

On the other side, some virtual instruments haven't been updated since Logic 9. The strings are weak, so are the brass sections... I like the drums and the synths, but if you really need to make people believe that those instruments are real, you better get some other libraries. Apart from that, all the MIDI editing is pretty easy to do, the interface is clean and organized and once you learn (or customize) some shortcuts you can work quite fast.

- Did you try many other models before getting this one?
I've worked with Cubase, Sonar, Nuendo, Reaper, Pro Tools... I don't really like to say 'best', but Logic certainly has many features that are very useful to me and the kind of work that I do.

- What is your opinion about the value for the price?
It's a bargain, no doubt about it!

- Knowing what you know now, would you make the same choice?
After some four years without releasing a new version it really looks like now the team behind Logic is working well. Unless some other software shows me something that really makes my life a lot easier, I don't see a reason to change it.
Did you find this review helpful?yesno