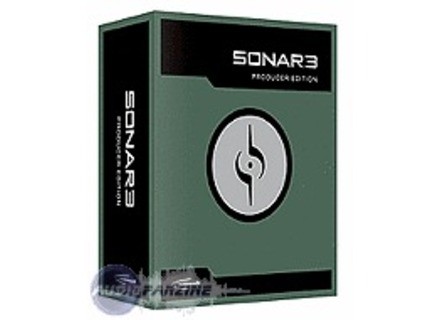 Sonar 3, General Sequencer from Cakewalk in the Sonar 3 series.

View other reviews for this product:
Installation without any concern, apart from this bad habit of programs such as Sonar moult to create different directories ... it bothers me, but it's personal

Manual means, however, lack of detail for certain operations

>> No crash so far
>> on the other hand, level "performance" is laughable compared to Logic Audio, I explain: when the app is reading, he can not do anything else. If you change qqchose during playback, MIDI notes are cut, there's the scrtccch bzzzzt and, in short it's not a logic or protools. For a project equivalent in terms of effects and tracks, I'm at 10% CPU in Logic and 50% in Sonar ... blah blah

To locate a single plug as Ozone (mastering) on ​​a single stereo track, it's already too much for him

But it is stable, really stable, that's cool!

Logic Audio I had to abandon following the acquisition of Emagic by these ù% ** Apple who stopped the licensing of PC. I regret this app of course, but Sonar does the trick and would have to threaten me with death that I use Steinberg software.

Sonar is much simpler, it is a good compromise in the end ... I'll probably still on in many years!
See the source
Did you find this review helpful?yesno
Cookies help us improve performance, enhance user experience and deliver our services. By using our services, you agree to our use of cookies. Find out more.