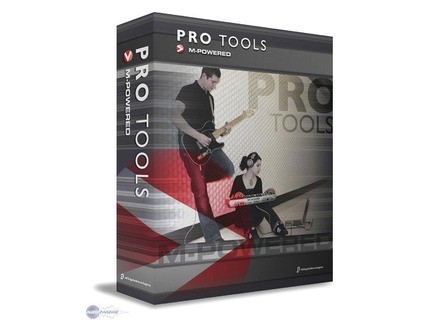 View other reviews for this product:
No problems during installation, sound card (audiophile 2496) immediately recognized and configured by default!
User of Reason Adapted, rewire mode is more intuitive than Cubase, for example.
Who handles used with the DAW, the overall configuration of the app is very fast and intuitive.
Regarding the manual, I find it very evasive regarding the installation and use of virtual instruments. When creating a home studio version of its flagship software, you should consider more importantly the virtual ...

The software was created to work with the hardware MAUDIO, the matter is that stable!

As for performance, 32 simultaneous audio tracks, 256 MIDI tracks, and a possible three dozen plugins available, it is enough to work well.

I use it for the past 6 months.

What I like most about this app is to work intuitively, and simply two windows! nothing to do with Cubase!
What I like least that's MIDI: grid Sampler slot not very practical for a former Cubase, quantification difficult short, even when it s'appercoi qu'l is more focused post production composition itself ...

Rated value, a simple and effective setup cost is less than 500euros card and soft understood then, what else?? ben nothing!

My conclusion: for the composition of cubase MIDI tracks (a simple version is sufficient in my case Cubasis vst5) sound card friendly and relatively powerful (MAUDIO mandatory in this case, but honestly, who gennera this?) And protools mpowered give you a good little workstation for more than préproduire models.
The possibilities for compatibility with larger versions of the software make it a great time saver in the development of albums that usually results in a non-negligible financial gain on the bill's pro studio for further operations.

For 360 euros, the case is more than interesting what they say if you look beyond the tip of his nose!
See the source
Did you find this review helpful?yesno
Cookies help us improve performance, enhance user experience and deliver our services. By using our services, you agree to our use of cookies. Find out more.