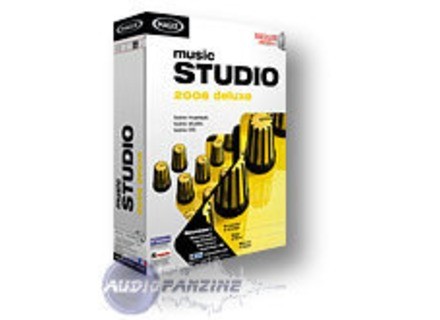 View other reviews for this product:
The installation of this software and no problems Submitted automatically installed and rev quickly, the box Magix Music Studio Deluxe 2006 includes 3 software for the sound: Magix Music Studio Deluxe 2006, Magix MIDI Studio Deluxe 2006 and multimedia player if it also contains software for viewing photos, etc ... But I do not know and do not use them.
It is possible to have some incompatibility or with other software or with the configuration of the pc. (For example: on my pc I do not know of or have this incompatibility, but I can not make use of MAGIX MIDI studio was part of the package when I double click on the icons, the software You Started but closes after 3 seconds).
Other than that the configuration is almost intuitive gnrale (if adj some knowledge in this area) but do not get lost and many connatre the configuration of your PC. (There are vidos tutorial on the installation CD if necessary ...)
Regarding the manual I think it focuses too much on using Magix MIDI Studio Deluxe 2006 and not enough on Magix Music Studio Deluxe 2006, but it is perfectly clear and explicit understanding of reading THE FIRST . (I for one hardly ever uses the manual, I prfre me "walk" in the software and learn all alone, it is quite easy to use)

I use Magix Music Studio Deluxe 2006 since November or December 2005 but for me that does not rev up good day because I use a year since DJ Magix Music Studio Deluxe 2005.
In the software Magix Music Studio Deluxe 2006 I really like are intuitive and quite nice, I like the effect in real time, which allows her SETTING THE quicker and better, more feature of Does mastering have addition from the 2005 version, also it is possible to add VST effect pluggins audio but plays a rle Whereas as a good reading of the song so much track it y a.
against this by a little less I like is the constant use of the CPU when recording or playing, more when recording multiple tracks should be the dj rgler ACCS path recorded files or know where he is put in place a change of the file container, as it happened to me several times to lose files saved in which case the software does not know there are no more or pick them up or so the song is damn rsultat.
So today I set up following a system that ranking with a record spcial source files by piece so I lose nothing (everyone's mthode).
Finally I think, no, I'm sure the software is to report / quality excellent.
Its price is largely infrieur from the capacity of Fast Fashion offered by this software (I'll put a 10/10 ...)
A choice of software I do not regret at all, but I did not test the other.
See the source
Did you find this review helpful?yesno
Cookies help us improve performance, enhance user experience and deliver our services. By using our services, you agree to our use of cookies. Find out more.