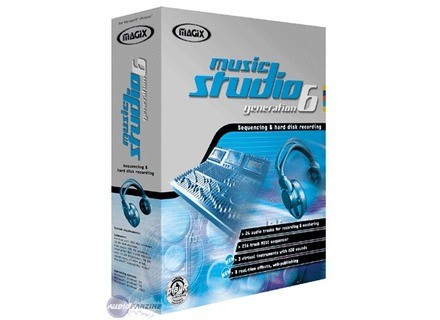 View other reviews for this product:
Installation is done by following the instructions in the manual.
However, it should put the cd on first use.

I use it on a pc, k6 500mhz, 256MB, Win98SE.
In audio studio can easily read a dozen tracks, which to me is more than enough. With a reverb plug moderately hungry (Anwida freeware) two three tracks no more.
Twelve o'clock in the studio over two MIDI tracks. But the reliability of the timing is bad. This is probably due to more than music studio windows.

I use this software for over 5 years.
In fact there are two programs, the audio studio, and studio noon.

The audio studio
Based on samplitude is an excellent software for editing with audio quality results. Cut to close enchillon, fade, volume automation, pan automation, limiter, normalization, are the functions I use most, and they are excellent, really. There is no quality difference on these features with the model samplitude (20xplus expensive).
Of course it has limits, as it is compatible with direct x plug which is not complete, some plugs spend some do not. No VST compatibility.
The master EQ and parametric wafer are poor, they spoil more than they correct. To be tried in another sequencer like Cubase, it seems to be a fault current. For best eq plugs are needed for quality.
Overall the other effects are not great either: compression, saturation, reverb, delay, pitch shift, time stretch, very average in terms of what we find today, in 2007, plug effect.
Apart from a bug that forces me to choose quickly a destination file during a backup, if not close program and data loss, the program is stable.

The MIDI Studio
Based on logic, it is a midi and audio sequencer.
Here vst as the beats that the effects are accepted.
Two small Analog Modeling Synths are provided: simple and good enough, especially for the release date of program, 2000.
I compose in midi with harware (rm1x yamaha, roland sh32) and sometimes I Export midi file to the computer.
J'm used primarily to edit MIDI files with the piano roll, it's still more convenient than the rm1x. I also like the quantize function with "tuple" odd.
He serves as host for vst synth that allows me to turn my pc, ie those that are not cpu intensive.
The biggest problem is the lack of reliability of this program, both the approximate timing twelve o'clock, on the stability: closing program and crash outright.

Not perfect but for the price an incredible tool that allowed me to store hundreds of songs.
See the source
Did you find this review helpful?yesno