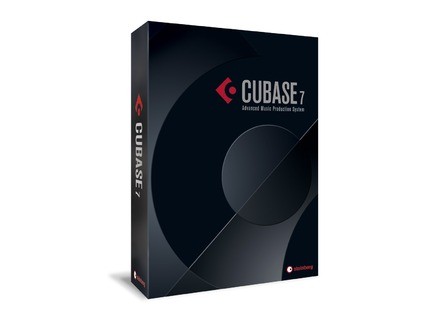 Cubase 7, General Sequencer from Steinberg in the Cubase series.

View other reviews for this product:
I just purchased the Steinberg Cubase 7 upgrade (not upgrade from 6.5). This software is a MIDI DAW and audio software workstation that has unlimited audio and MIDI tracks. It comes loaded with over 50 plug ins and a handful of VST’s. The VST’s that came with it were nothing special to me but I already had a ton of other VST’s that I had from FL Studio and Ableton Live so they worked fine in Cubase 7.

Cubase 7 for me was easy to understand because the layout and basic functions of it where no different than the older versions of Cubase. This version does seem to be a lot faster though, loading effects and VST’s has never been easier. Even some of the VST’s that I use that hog up the CPU do not seem to take up much CPU when I use them in Cubase 7.

Cubase 7 runs smoothly and has not given me any issues. I was a little upset that I had to upgrade and still pay 250 because I didn’t upgrade from version 6.5. I think users should be able to upgrade at the normal upgrade price no matter what previous version they are using or have.
There are over 2 thousand VST sounds that come loaded with Cubase 7 but don’t be fooled because all of them are not the best of quality. The presets that come in Ableton, Logic, and FL Studio where all better to me.
There is a new feature in Cubase 7 though that I think is really nice to have, it is a “chord track” feature that makes it easy to compose off of your basic chords and Cubase 7 makes it really easy to modify those chords and arrangements almost effortlessly. This really helped me be creative with my progressions and melodies. But that was the only feature that I really felt was a big difference from before and maybe the workflow is a little more user friendly and easier to work with.