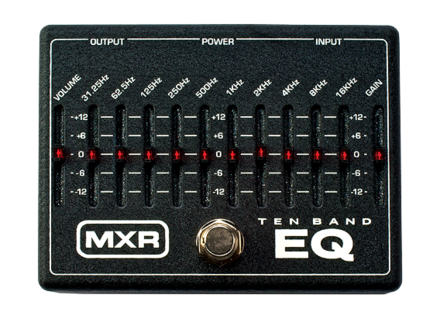 Easy to set up. Either in front of the amp and it changes the guitar tone, or in the effects loop of the amp and it controls the entire signal chains (much more dramatic difference). Simple cut or boost controls. Plug it in, set the volume controls to where it's highest without them blinking (if they blink the levels are too high and it's distorting). From there just start boosting or cutting the frequencies until you like how it sounds. A basic understanding is the lower 3 are bass and control how much low end you have in your tone. Too much and it gets muddy and starts farting out, too little and it's too bright and can be painful to hear. Next 4 are mids, they control the definition as well as the perceived "size" of your tone. Cutting gives you more definition but takes away volume and thickness/size. Boosting gives you a much fuller and bigger tone but loses definition. Metal music generally cuts the mids slightly to give definition but not too much to where it sounds thin. The last 3 are the treble frequencies. They control the high end or brightness. Boost too much and it can sound ice picky (painfully bright), cut too much and it can sound dull and too bassy.

Nothing really to say about the sound quality, it's just an EQ. Made to boost of cut frequencies to help tailor you tone.

There's a reason this is the most common EQ pedal. It's been used from Randy Rhoads (he used the old blue vintage one) all the way to Machine Head. It's very tweakable and very rugged. Build like a tank so it can take a beating and keep on working. I'd recommend this to anyone wanting to further tailor their sound beyond what their amp can do.
Did you find this review helpful?yesno