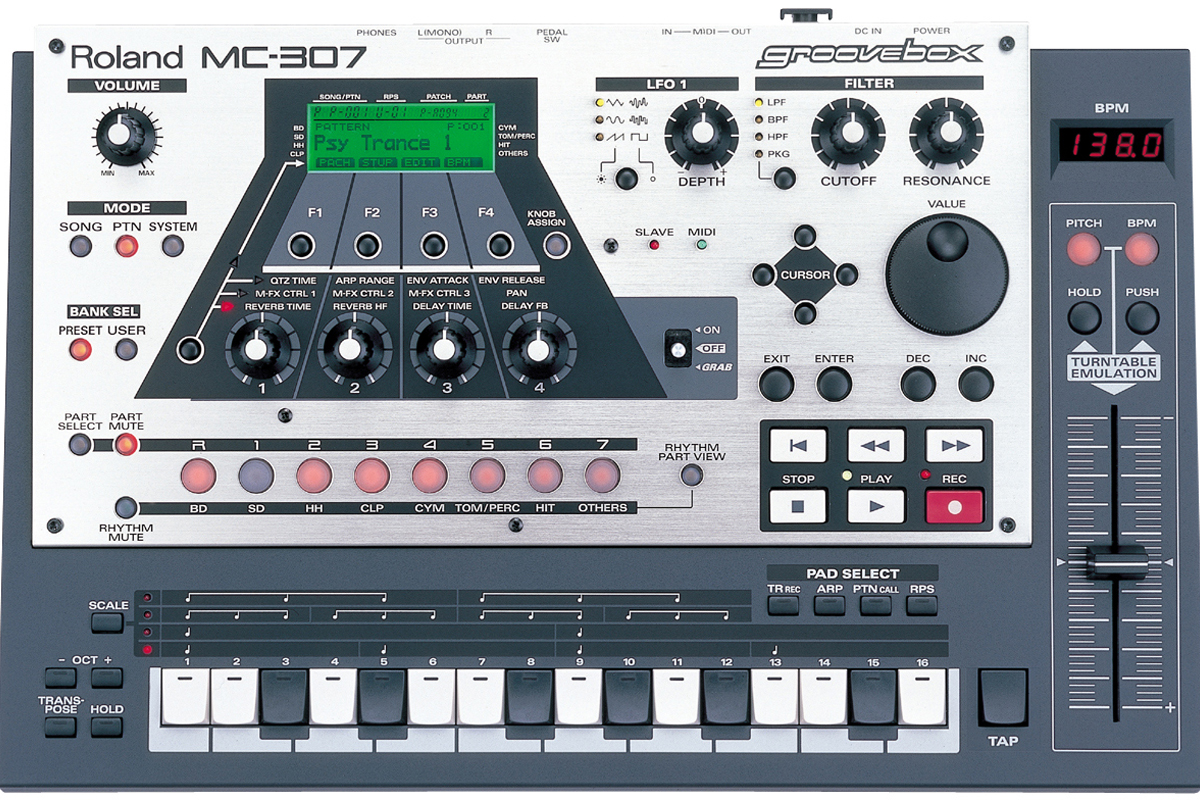 Groove Machine from Roland belonging to the MC series.

View other reviews for this product:
diplodocus303

Publié le 09/11/14 à 09:08
For MIDI is just fine machine stable.
The effects are digital and banal, as in other equivalent machines. Too bad we can not stack effects. Too bad also that it has no separate outputs. It lacks that ...
Machine with a lot of factory sounds in it, in fact at the time the Roland engineers had taken a 505 and did get in a box of MC303 type, 307. So it's super tight in and maintenance is not easy.
I remember it was released, a lot of guys who could read and had especially consulted the manual came to a complete live with MC307, which was more compact and came in satchel bag.
The big advantage of this is its sequencer groove box, yes it is too complicated for neuneus, but who knows how to use it is really effective. There are 2 types of sequencer mode the rec TR (TR classic roland sequencer) and real time (to make patterns on the fly and in real time). I read earlier that someone said the sequencer was crap with buttons and poor. The buttons are plastic and normal like a drum machine, behind the buttons they are switches panasonic evu series, a reference that is found in many other machines and mixers, it is not poor quality.

The manual is rather thick, but the machine is pretty intuitive.
It's a groove box, you can make complete tracks with. It lacks a few buttons on the front, takes a little too go into sub menus.
I said that the seq was effective, I will explain the basic principle of a groove, it's actually good to do things quickly. Just take a factory pattern with a nice rhythm, just copy the rhythmic pattern in use. Then look at how this is done rhythmically. Copy paste in several places and make small changes to the TR rec. Then take 2 or 3 sounds, and tamper with them. Then the top is to control a module with analog, put an arpeggio sequencer 307 and play a melody on top of the con with realtime sequencer function. And presto you have laid a piece in minutes.
You can also make your rhythmic AZ sequencer, but it's much longer and ultimately it is perhaps not the spirit of the machine. It is great for the préchié.

The rhythmic sounds are very good for recorded sounds. TR808 sounds are not bad.
By TB303 against sounds are ridiculous.
Velocity accurately.

I have since 2007, I have used it once to lay a live fast, I use it little. Let's say I have machines that I want more, but it is perfect for risking his life at parties watered. A good spare.
I also tried vaguely mc909 is the same except that the spirit groovebox 909 is a gas plant.
What I like least is the recorded sounds of TB303, they are really ridiculous, but no more than on the machines of other brands ...
There is a pitch to wedge of vinyl records with, it actually not used much especially at the time was making a case RedSound sync vinyls and noon. (Something that is not sold for that matter) on this roland shot would have been better put other settings accessible from the front instead of the pitch ... then it's a matter of taste, but I in my config I have no need of this pitch
I repeat, but it's a shame that step 8 outputs in the ass for the shares, it would have been more interesting and professional.
It is a now obsolete but is efficient machine. She did not score his time, in 2002 she was on the star catalog music on the same page as the MPC2000 ... Actually roland has occurred after 505 and before 909 This is a middle of groovebox production, it far exceeds the MC303, yet it is the same format. And it is not zero at all.
00