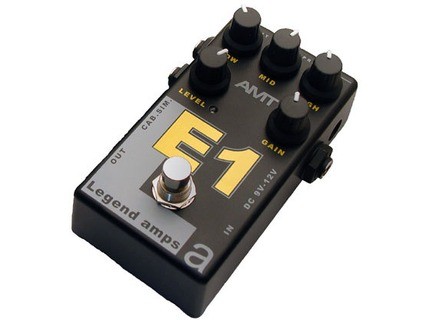 View other reviews for this product:
Preamp pedal as sensible simulate the sound of an Engl
Low Mid Treble. One would have hoped settings 2 mids, as on the E530.
Gain level.
An entry.
An output with speaker simulation, and an outlet without.
In short, it is a small preamp rather simple and apparently solid construction.

Configuration is very simple.
A manual? AMT has not bothered to put one in the box. And they were right! It would be an unnecessary additional cost.

It's easy to use, you plug, you turn the knobs, you play.

I expected better anyway. It does not really makes me think of a sound Engl. It just looks like a distortion pedal with a tone stack more or less on a transplanted Engl, with integrated speaker simulator.

It does not sound super bad, but hey, the distortion is extremely close to what I got with my Hardwire TL-2 Metal Distortion + Amplifier.

The advantage here is that you can do without an amp because everything is in one pedal.

Well it clearly is better than the Line6, but the sound does not sellotape me more than that.

And the second setting of medium E530 so I really miss.
Indeed, it is hard to find a compromise between the low will create a sound a bit mushy at the bottom, and the medium that digs a little too wide.

There is a lack of harmonics in the sound, as if they were absorbed

It's nice to be a model, or else to build a sound recording which is already good

High Gain in simulation, this is my first purchase, was not satisfied with the versions available from High Gain Tech21.

It's a pedal that I purchased to make me happy at night without the neighbors and shit without ruining myself, and it fills that role very well.

It can also troubleshoot live.

For that I use is actually a pedal I would buy. But in contexts more "serious", I do not recommend it.
See the source
Did you find this review helpful?yesno
Cookies help us improve performance, enhance user experience and deliver our services. By using our services, you agree to our use of cookies. Find out more.