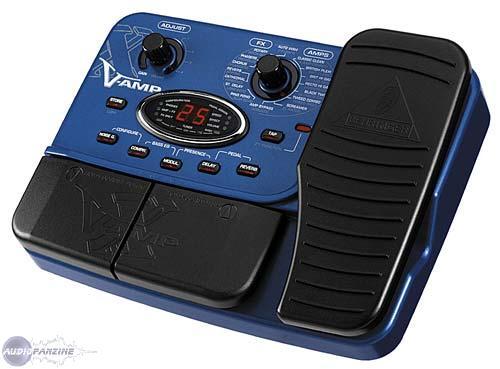 View other reviews for this product:
patvmax
Publié le 11/01/07 à 16:46
I know, I know, (as said Jean Gabin!) Since it is cheap, has nothing worth ..... AND FALSE FALSE ARCHI .. Lots of amps and effects more or less imits! because it is the purpose of this xvamp. Mission SUCCESSFUL .. (more compact version of the v-RVISE amp2) again, behringer knows very well about it, and see the cream of guitarist before producing this small pedalboard .... and user-friendly manual is not afraid to mention all the brands imitate ... the only of its kind. (and POD). most say; "Has Manire of" .. but .. prciser while behringer stake Franco ... it's either: marshall, fender, mesa, roland, engl, etc., and as for the effects :: :::: boss, vox, electro harmonix, proco, TS808 ibz etc.

16 amp + speakers of legend, as many pedals, and 100 preset! Presets each has a sound totally diffrent! KIDIMIEUX ???? but it is quite complicated to use without notice .. some keys are more functions, and sometimes it is necessary to press 2 or 3 at the same time.But we made it .. the pedal fairly robust, enables also to vary the output level or saturated ... what's great, each amp is a modifiable wish, and each effect too. it's pretty boring to quantify and memorize, but the result can be great .. on the other hand, take his time, because the level of output of 1 lev very good headphones (or table) quickly becomes tiring for the leaves .dropoff window

It's really good ... except one amp or is less convincing .. (less to find the right output parameter, seems there are 9, I have not tried everything.) but precisely this xvamp LIEU amps! by against the headphone or studio, it beats all its competitors, except perhaps the tone vox with his little lamp. or 1 bit pod xt, + but expensive. and you also have a simple guitar with a true bass sound. (Preset 29 I think) very useful and rare! the delays and auto wah in modifiers are bluffing ..

Everything is just good master it ... he. his look is very nice. and price! but it requires a good knowledge of the booklet up among you as if this thing was rserv children. but it is not the cas..par against what is boring, it is often necessary to press 2 or 3 keys at the same time to change settings .. auto wah is not so rotten that has I think. ( you can change the sound) the whamy, I still looking. seems that there is one, really? ..aussi although the V-amp 2 and smaller ... the power supply plug is 10 times better than the big VAMP2. (a pin fragile) .but so big that the vamp pro .... short, I advises that thing pti! even in new, it is very accessible. I advise you to compare a certain autres.et remember that Behringer has a VERY extended range of gear of all kinds. they know the music. (to summarize)
00