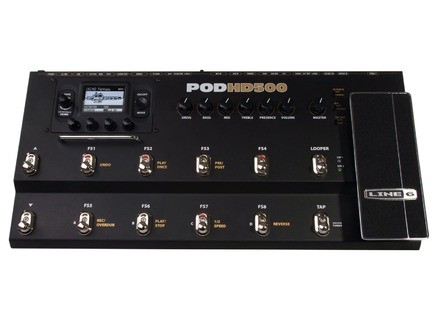 View other reviews for this product:
The Line 6 POD HD500 is the flagship model of the new HD series; the latest incarnation of the company's popular Pod modeling units.
The following specs for the HD500 are taken directly from the Line 6 website:

This unit is a floorboard with foot switches and knobs, as well as a rocker pedal that works as a combination volume/expression/wah pedal.

By flipping through the stock presets I was able to find some great usable tones, as well as some over the top noisy creations that were more fun and experimental than functional in a live setup.

Getting deep into the programming aspect of this device can be time consuming and a little frustrating if you don't like tweaking and just want immediate satisfaction. But compared to other multi effects units and modelers, this one is laid out very logically and has a streamlined design that is easy to get the hang of, even for a novice tweaker.
There are so many features, connections, and routing capabilities in this unit that only a good look through the downloadable manual will give you all the information you need about this product. A stripped down "quick-start" guide is shipped with the unit and only scratches the surface of what this thing can do.

NOTE: I tested the HD500 through several tube amps, into the front end of a Dual Rectifier, through just the power amp section of the Dual Rectifier, and into a P.A. system and monitors. I had the best results with the tube power amps, and that is what I'm basing my review on, as that is how I use the unit in a live environment.

I have owned or used almost every version of the Pod since they debuted, as well as many of their modeling amplifiers and effects.

I can say with confidence that the modeling has been improved greatly in the HD series. Finally, digital is starting to catch up with analog! The amp models really sound and feel similar to the real thing. Probably the biggest difference is the feel and subtle overtones and responses that can be coaxed from the unit.
For example, rolling back the guitar's volume cleaned up the plexi model until it had just the slightest bit of dirt, but the tone stayed chimey and didn't become "jittery" like the simulations from the previous pod models would. There was no jumpy digital artifact sound, just a convincing amp like sound.

The Marshall and Park (made by Marshall) amps are my favorite and are very true to the real amps modeled. The trademark Marshall high cut and wiry, complex distortion is there and it feels and sounds great to play! I was able to nail Slash's "Sweet Child" tone, or at least 95% there, Angus' back in black, and I got a great early Pearl Jam tone.

The "Treadplate" model, which is based on Mesa Boogie's Dual Rectifier, is very faithful to the real deal, and I can switch between the two to A/B them and tweak the Line 6 until they're almost identical. It feels big and crushing, just like the Boogie.

The Fender models are gorgeous and very convincing. Beautiful clean tones can be had and I bet if someone took a blind listening test, they'd have a tough time telling the Fender Deluxe Reverb apart from the simulation!

The Divided By Thirteen and Dr. Z models get an amazing semi-clean grit sound that's amazingly touch sensitive and fun to play!

The Engl Fireball 100 model is extremely tight and has your modern metal needs covered. I was really pleased with how well this model blended when setting up a two-amp patch/sound.
I actually am considering buying an Engl now after playing this simulation!

The Vox models sound like only a Vox can, enough said! Amazing for recording semi-dirty rhythms and for layering.

Using the Bogner Uberschall model, I was able to create a sound almost identical to Jerry Cantrell's huge sound on "A Looking In View" from Alice In Chains' latest release. Big and chunky like the rectifier model, but with a sweeter midrange and an even bigger sound.

The effects in the HD500 are ported directly from the M13 and M9 units. The M series was a very popular "pedalboard in a box" type of floorboard that gave you instant access to many of the most famous effects ever, and many of Line 6's own effects from their original four Stompbox Modeler units.

I haven't even used all of the effects yet, but I can say that all of them sound better than my old Pod Pro rack units. The effects were always a bit lacking in realism in the Pod units, but the HD effects are very nice. Some simulations of certain analog stomp box effects like the script phaser don't quite nail the real thing, but that is to be expected. The chorus sounds could also be a bit more deep and lush.
The verbs and delays are great, and there are many to choose from. All effects can be tweaked endlessly to perfectly suit your tone preference.

The warmth and realism in this unit is a huge advance for Line 6, and takes modeling one step closer to blurring the line between tube and digital simulation. I still prefer a tube amp, but considering the amount of connections, great effects, and ease of setup for live and studio use, this unit is a definite must-have if you're down with digital!
Did you find this review helpful?yesno
Cookies help us improve performance, enhance user experience and deliver our services. By using our services, you agree to our use of cookies. Find out more.