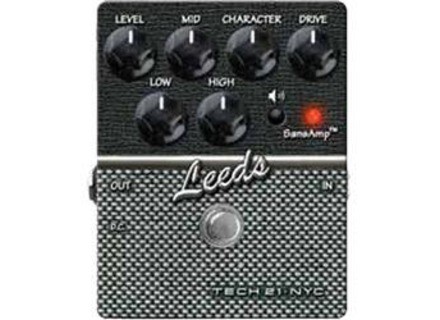 The setup is very simple and the manual provided by Tech21 is very well done, as usual at home.

Another slap administered by Tech21 sound!
They managed to lock up an amp in a cigar box. Real gear heads at Tech21!

There is dynamic, it reacts like a real amp, the "je ne sais quoi" that gives wings when playing with a good amp.

There is a jump in the past it smells good rock crazy at the time.
The clean tones are beautiful, deep, crystalline, with a very clear attack.

The more one pushes the drive, the more the amp ... forgiveness, the more Leeds appears to ask what drives him, as if it had a reserve of sick just like a tube amp that sounds way more beautiful than you push the volume.

All harmonics are beautiful, the mediums do not buzzing, treble supidement are not screaming, bass bring a well rounded without being intrusive.

There's this dirty side but clean rock typically own only Vox and Hiwatt can do.

I find myself playing the intro to Hells Bells by AC / DC and it sounds serious with Leeds. The definition of notes is superb. The grain and character of the guitar is beautifully observed

Obviously, the sound is there Gilmourien.
You do psychobilly, no problem, I am pleased with this Leeds.

Pushing the drive at the bottom, and putting a small delay to the output of the pedal, you get a lead overdrive sound with a depth and expressiveness that I had rarely heard.

In addition to the pedal, agrees very well be drivée an overdrive or a fuzz input for those who want more distortion.

I tested with my Jackson, and that is pretty too, with a more quickly saturated.

The character can move from its dark enough for a more flashy and aggressive.

You made a recording with a bass line passes through a VT Bass Deluxe side, and you'll take a monstrous slap so beautiful

Whatever you do, close your eyes and you can imagine over your monitor speakers, but you feel you have an amp in front of you. The presence of Leeds is impressive.

I'm even hoping for Deluxe version with XLR phantom power, memory and an effects loop.

Used for 3 days, I made some recordings for the test.
I can not believe it. How do they do?


I already had a Tri-AC which was not great in crunch sounds.
The VT Bass and demos have convinced me that the character series had reached a new milestone in the modeling "amp.
The line6 are the street with leuirs pod

The peculiarities that I love most:
- It's not bulky
- It's simple to use
- That sounds serious at serious! (Nice to tears!
- In nine, more than 6 times less expensive than a Hiwatt Custom 7

The specifics I like least:
- It does not cure my GAS crisis in Tech21 (J''en want more)
- I'll do some more sleepless nights because of it ..
- A deluxe version of those little boxes becomes essential

The price / quality ratio is excellent.
With experience, this is THE choice again. I advise everyone to make that choice.
See the source
Did you find this review helpful?yesno
Cookies help us improve performance, enhance user experience and deliver our services. By using our services, you agree to our use of cookies. Find out more.