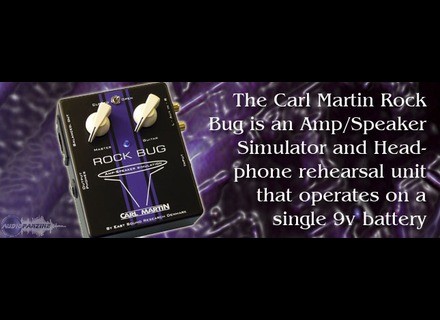 Carl Martin presents the Rock Bug, an amp/speaker simulator and headphone rehearsal unit that operates on a single 9V battery.

Aimed at feeling and sounding particularily realistic, the Rock Bug features selectable cabinet simulation (open or close back) and is said to be effectively responsive to the incoming volume from the instrument. An AUX stereo input can also be used for adding an MP3, CD or DAT player in the mix.

A balanced XLR output also allows to connect the Rock Bug to a mixing console for direct recording, solo gigs accompanying a pre-recorded music with a live guitar sound, or as a DI for live performance.

Described by the brand as "a Danish-Swiss Army Knife that belongs in the pocket of every guitar-players gig-bag", this Rock Bug should be available soon at a still unspecified price.