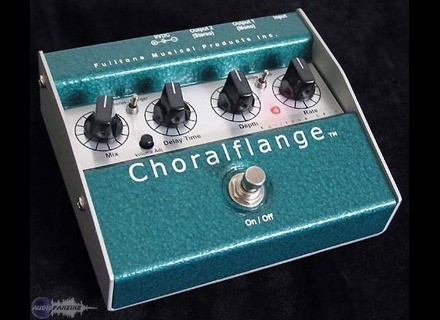 Choralflange, Chorus for Guitar from Fulltone.

View other reviews for this product:
This pedal provides Chorus and Flanger effects. Analog circuitry with typical guitar cord connections.

The sound is stellar. The manual provides suggested settings which are, unlike most product suggestions, absolutely fantastic.

I mainly used my electric guitars, notably a Gibson Les Paul and an ESP Eclipse. The sound quality is through the roof. The flanger can give some authentic old school Van Halen tones that are absolutely sick. The chorus I like to set up slow and deep, and it delivers a quality to cleaner gain sounds that is jaw dropping. The price of the unit is significant compared to typical big store brands, but the product delivers the goods. There is a setting I use for Korn-type effects, a fast chorus, that became such a signature tone that my band was inspired to write a whole tune around it.

I love the tones it gives on clean to mid gain settings. It destroys for live guitar applications. The build quality is very high, from the solid chasis to the meaty feeling pots and knobs. However, the toggle on mine became inconsistant and faulty in the first week. At the time I purchased this, the line was not yet in major stores such as Guitar Center. I had hear horror stories of people trying to deal with the owner. I have one trusted friend who loves the pedals but swore to never buy another after dealing with the owner, his abrasive attitude was described as less than desirable.
I got the owner on the phone, and it was like an inquisition, he started by saying he wouldn't honor warranties if I bought it from eBay or used. He was assuming, as he didn't bother asking where I got it. That was very aggressive in a bad way. I had to repeat a few times that I did indeed buy it from an authorized dealer. His reaction was gruff to be kind, but he said he would fix it if I mailed it in. A bad day perhaps? Most likely this is how he approaches commonfolk as I read worse stories online. He fixed it and mailed it back, but I couldn't help but feel I was dealing with a world class arrogant bully. As time went on, I realized I liked staying "in the box" for studio recordings- not because it was a better tone, but because the timing was so much easier to adjust. I ran across an MXR Phaser that I enjoyed for my modulations, so I winded up flipping the CoralFlnage as the cost benefit was not worth it during a money crunch. If one needs a superior modulation pedal for live work, check it out, but you almost need a drummer with an in ear monitor to keep stable tempos to get the timing to be accurate. Too much headache, I choose the better prices EVH MXR pedals. It doesn't help that the owner comes off so unlikable.
Did you find this review helpful?yesno
Cookies help us improve performance, enhance user experience and deliver our services. By using our services, you agree to our use of cookies. Find out more.