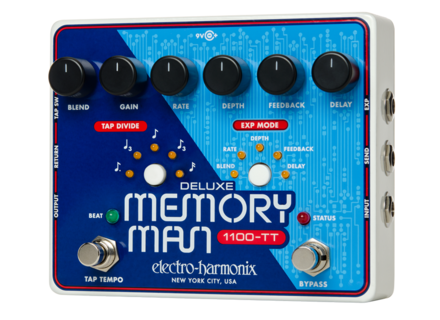 Buy this productView price information >
View other reviews for this product:
This is a brilliant update of the Deluxe Memory Man franchise that EH has been building off and on since the late 70s. Characteristically the DMM pedals have had a clean, musical distortion with excellent modulation. This pedal adds a digital control section which allows tap tempo, an external effects loop and external control of a number of parameters (more later). Unfortunately, the device requires 4 MN3005 chips from Panasonic (these are the delay chips with the longest delay ever available, allowing very clear and high quality repeats without clock noise or excessive loss of high end). EH has said that they've discovered 75% of their MN3005s were fake, actually 3008s with 1/2 the delay time, so they've built something on the order of 300, and when they're gone they'll be reissued in a 650 mSec version (the original DMMTT is up to 1.5 seconds with tap).

Basic use is simple-set the delay with the knob or the tap tempo, set the level of the delay compared to the input signal, and the feedback knob for the number of repeats. Additional controls include a gain knob that drives the overall level of the pedal (both delayed and clean sounds), a modulation knob which uses a sine wave on one side and a square wave on the other. You can use this to subtly change the pitch of the repeats to emulate tape delay. You can also use it for radical pitch shifting, subtle to seasick flange/chorus, and other over the top effects. The tap tempo can be adjusted to various divisions so that playing at the base rate (quarter notes) can result in 1/8th note arpeggios or triplets. This is not practically footswitchable (the button to choose divisions is small and flat to the surface), but there is an easy mod where you can use an external tap pedal to step thru the division, or to step thru the expression pedal targets. The expression pedal can replace the function of any of the knobs, allowing smooth control over anything you might want a knob for... The EP jack uses 0-5v on the ring, with the signal thru the tip, so the pedal can be integrated with a Moog system if you use the CP251 controller to attenuate the Moog voltage from 10v to 5v. The effects loop affects only the delayed sound, so you can EQ, pitch shift, delay, mangle the delay only for many weird and wonderful effects.

The delays are fairly clear, with gradual loss of high and low end as the repeats go on. This means that playing along with the the delayed sound, even with high levels of feedback, allows the notes you're currently playing to shine thru. Some delays gradually morph into a click as the delays go on (like the Memory Lane), this one retains some of the tone of the note, more like the old DM2. It plays well with distortion and has a decent amount overhead for loud inputs.

I've owned or played more than 50 delays by this time, from an original EP2 and the Sireco Oilcans to the most modern digital rackmounts, and this thing is in my top 5. It's got a ton of control, can be integrated into bigger more complex systems, and has a basic excellent delay sound. Definitely a keeper. Now for the bad news, with 300 units on the market, get searching NOW because when they're gone they're never coming back. Diamond has discontinued it's delay due to the absence of available MN3005 chips, there just aren't enough for EH to go back into the DMMTT business, and you won't be able to build your own due to the digital complexity.
Did you find this review helpful?yesno