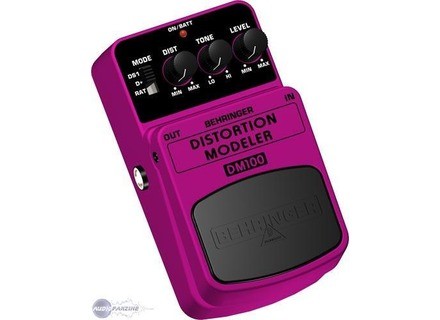 View other reviews for this product:
Behringer has been on a mission when it comes to cloning pedals. This time, they combined the Boss DS-1, MXR Distortion+/250 and the RAT. There is a three way switch to select between these three different modes, and it also has a tone knob, volume knob and gain knob.

The sound isn't too bad, but it doesn't truly emulate all three different pedals. For one, these are fairly different distortion pedals. Hell, the Distortion+ is actually an overdrive pedal. In the DS-1 setting, it's supposed to be like the Boss DS-1. However, it seems to be a bit buzzy. Then again, the DS-1 was a bit buzzy anyway so there's not a huge change. The Distortion+ mode sounds nothing like the normal overdrive. It is way more like a distortion pedal than anything else. The RAT setting also doesn't sound like a RAT. That said, for the price, it's not that bad.

If you're expecting to get all three different pedals in one little box, you might as well give up now. It doesn't sound like all three pedals. That said, for the price, it's not that terrible of a pedal. I have a moral issue with these pedals in that you should never support actual clone pedals like this, but it's up to you if you wanna buy it or not. I'd rather have all three different pedals simply because they sound different and are way more versatile.
Did you find this review helpful?yesno