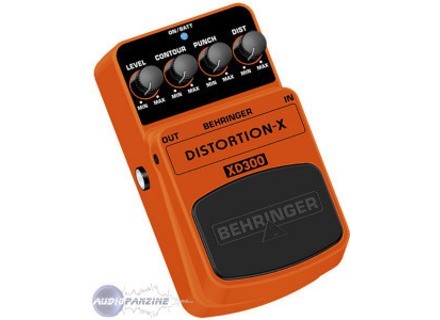 View other reviews for this product:
Behringer has been cloning pedals lately, and this is no exception. However, they decided to clone an odd pedal -- the Boss XT-2 Xtortion. This is an extremely polarizing pedal, so I'm not exactly sure why they decided to clone it. It has the same level, punch, contour and distortion knobs like the original.

First of all, I dislike the original Boss version a lot, and considering this is a clone, it's pretty much going to be a similar review. There's a reason why it was discontinued after only being available for a few years. The distortion in this pedal is extremely harsh. It has this odd, gritty, yet boxy kinda sound. In fact, it sounds exactly like a that infamous "pedal distortion" that so many have come to hate. When you back off the gain, it sounds extremely thin and harsh. Maxing out the gain will result in a swarm of bees so powerful that you'll wonder if your amp is broken, and I don't mean that in a good way. Some ridiculous fuzzes can do that speaker breaking stuff in a cool way, but I could never find a usable tone with this thing.

If you liked the Boss XT-2 Xtortion, you're in an extremely small group of people. If that's the case, you're probably better off getting one of these. They're cheaper and easier to find. However, for 99% of the normal people out there who like good guitar tones, you'll want to avoid this pedal like the plague. It really sounds awful and buzzy in every possible way.
Did you find this review helpful?yesno
Cookies help us improve performance, enhance user experience and deliver our services. By using our services, you agree to our use of cookies. Find out more.