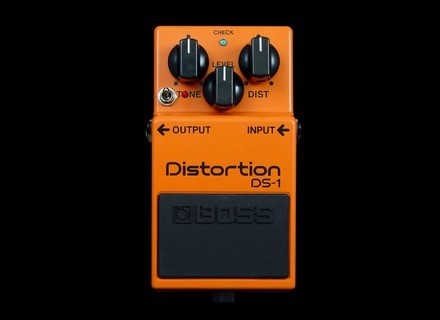 View other reviews for this product:
This is probably the most famous DS1 mod out there. Keeley is one of the top modders in the field, and he has all kinds of pros using his pedals. The DS1 has always been one of those "go to" distortion boxes, but I always found it to sound very "pedal" like, if you know what I mean. Keeley helps fix this issue, and he also adds a nice switch so you can get even more tones out of the thing. The pedal still has your standard gain, tone and level knobs, but it also has a two way switch to allow you to select between different diode settings.

The pedal is still very much like the normal Boss in that it's housed in an indestructible housing. These things have seen all kinds of abuse throughout the years, and they always seem to handle whatever is thrown at them. The layout of the knobs is slightly different on the DS1 compared to other pedals such as the SD1 and whatnot. Instead of the tone being in the middle, the level is in the middle. This is something to keep in mind in case you've never used one of these things before. The manual is kinda useless now that Keeley modded it, but it's not really needed as these are very simple to use.

Like I said before, the standard Boss DS1 always sounded a bit thin and boxy to me. I could never get a really great tone out of it. The Keeley helps fix this issue, and it makes it a lot more usable. The biggest thing about this is the extra switch that allows you to select between the Seeing Eye mod and the extra LED that you can add in the circuit. You won't be able to physically see the LED, but it's added to the clipping section to give you a more aggressive tone. I'm a huge fan of using LEDs in the clipping section, and I tend to use this mode the most out of all of them.

The pedal is pretty solid, but it's expensive compared to the dirt cheap DS1s you can find all throughout Craigslist and/or eBay. It's a decent gain pedal, but I still can't truly get used to using the DS1 as a primary gain pedal. I much prefer amp distortion. It's hard to choose between this and the Analogman version as they're both different takes on the same pedal, but I find the Keeley one to be a bit more modern sounding.
Did you find this review helpful?yesno
Cookies help us improve performance, enhance user experience and deliver our services. By using our services, you agree to our use of cookies. Find out more.