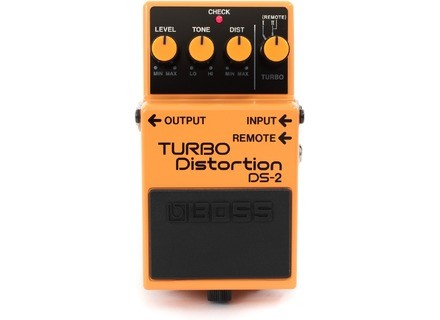 Buy this productView price information >
View other reviews for this product:
Distortion with a "turbo" mode, input output jack, everything has been said.

It will be simpler, one seeks the sound we love and Simone car. (Simon or if you are a girl, or whatever)

This is the first effect I bought myself !!!
Yes it can be unloved, I personally have emerged to play on my Engl Screamer. It sends wood! We can if we want to append a SD1 and there was a vicious duel.
Of course it was popularized by Kurt Cobain (and I admit this has influenced my purchase at the time) as his sister DS1 (I hesitate to have to test).
I do not think it sounds synthetic, I've never cheated on her with another pedal (haha it was easy) distortion except family boss, because others do not like them.
Here it is rough around the edges.
Measure out for distortion sounds yucky not overdrive typed by the user against turbo I not use it. I prefer the "lead" as "solo".
Finally, as all effects, do so before test (scratching your amp or even the same).

First effect bought almost 20 years ago!
I wanted to sound like Nirvana (I thought as much, that the effect was enough alone; before discovering the world of music and its intricacies).
In short, I have never sold, it always makes me service and is IN DE STRU CTIBLE.
She took wrinkles (some shots deci beyond) but still holds up.
I always play with, and all the amps I've tried to, I have never been disappointed.
Yes I would do this choice, I would try the DS 1 well too.
See the source
Did you find this review helpful?yesno
Cookies help us improve performance, enhance user experience and deliver our services. By using our services, you agree to our use of cookies. Find out more.