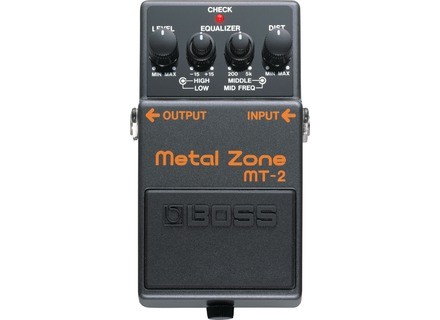 Buy this productView price information >
View other reviews for this product:
Distortion pedal METAL!
Here, I give my opinion on a modified version by Robert Keeley to states!
4 knobs: level eq bass / treble / mid / rate distortion
more about this release: a 3-position switch
1/version "stock" reworked 2/haut gain Loudspeaker 3/disto emulated only 4-12 "tube"
blue led (it's ugly, but it is nothing more than red)
196 euros in England. (5 year warranty)
Provided a further notice (English)

This is a métalzone!
if you like too much at first, it is pointless to pay for it

it is identical, but the components of low-end versions of "factory" is here replaced by the top!
resulting in eq, (notably the mediums) is even more efficient and accurate (no need to support each of 1 GE7), the treble a bit "synthetic" and only major flaw I found in my version the public,
have become more "nature" and the presence of low and clear!
less noise too, and really, a perfect medium management, so important in the world of metal!

So ruthlessly efficient for this pedal hell!
the addition of the switch is really nice and the sound changes depending on the position!
attention to that stuff put in a central position only works with a baffle 4 / 12!!
is that a pitbull with rabies and that will blow a speaker or a crappy combo!!
very people than usual, have a boost with métalzone and they say it is the métalzone after putting the mess in her!
I prefer the position "stock improved" since I was a fan of the normal Metazon before!
the change is subtle but very present, especially at high volume.
tube emulation does not serve me because my foot goes through a head lamp that warms all with happiness)

That's two months it replaces my old métalzone!
I am proud, and she commands respect in many detractors who proliferate lies in its promos!
they connect with decent gear before criticizing!!
sure with a stew transistor 20w speakers and rotten, it is not miracles!
I recommend this wonder who does not correct mesa but plays with good microphones and speakers!
2 solutions to acquire.
Buy a new one already changed (or England states) (196 euros)
or send to your states to make mofifier (80 euros)
Pedal a demon!
See the source
Did you find this review helpful?yesno
Cookies help us improve performance, enhance user experience and deliver our services. By using our services, you agree to our use of cookies. Find out more.