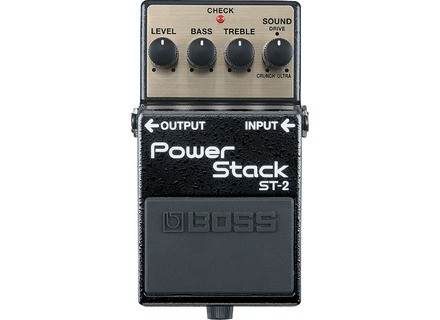 Buy this productView price information >
View other reviews for this product:
From fat crunch to ultra high-gain distortion, the ST-2 Power Stack delivers famous BOSS distortion with a stunning amount of power that’s akin to coveted tube amps and professional amp stacks. The SOUND knob simultaneously blends gain amount and sound character, so you can quickly dial up anything from vintage crunch and punchy drive to full-assault distortion. To add further detail to your tone, simply tweak the onboard two-band EQ to taste. The ST-2 is one very unique distortion pedal, calling on BOSS’ years of amp modeling research to bring you real stack sounds in a compact stompbox.

A newish boss pedal by Boss. Geared towards...anybody who wants a 'big' sounding distortion, which is...EVERY guitar player out there really..

The sound...it's hit or miss with this one as it seems. A few of my guitar player buddies love it and some of them hate it. Be being one of the latter. I don't find anything particularly amazing with this pedal. To me it sounds like a well EQ-ed metal zone with slightly more mids. Oh and there's no mid knob on this either, how inconvenient considering the guitar is a midrange instrument.

No it doesn't sound like a stack to me, but it does sound like a well EQ-ed distortion pedal. By that I mean it's usable for certain purposes but I could definitely see myself using other pedals if given the choice. It's a very tight distortion and it's not bee-hive sounding like the older generation boss distortion pedals so that's nice. However, it's still definitely got that boss distortion sound, but just rounded off a bit so it's not shrill. But it doesn't sag like a tube amp, whatsoever.

Also if you fiddle with the knobs you don't really get completely different sounds, more like you get the same sound, just with less gain or less treble and bass. It's not so versatile in my opinion.

Don't believe the hype with this one. I know I saw the same Marty Friedman demo you did. But I'm definitely not convinced with this pedal. It sounds nothing like what it's supposed to be, a 'stack' although that in itself is so vague to the point where it sounds pretty much like nothing. What kind of stack? a vintage marshall? a boogie? a vox? There's just so many colors that calling it a 'stack' just doesn't help narrow it down to anything. Overall in my opinion it's just another distortion pedal that sounds slightly better than the older boss distortion pedals but nothing revolutionary. Which means, solidstate distortion pedal. NOT tube.
Did you find this review helpful?yesno
Cookies help us improve performance, enhance user experience and deliver our services. By using our services, you agree to our use of cookies. Find out more.