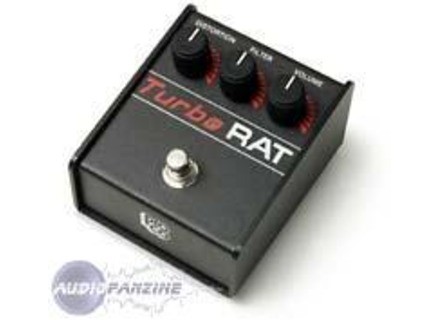 Buy this productView price information >
View other reviews for this product:
The Proco Sound Turbo Rat is a supped up version of the classic Rat distortion pedal.  This is an analog pedal with a 1/4" input and output, and has a 9 volt power supply jack as well.  The pedal is a very compact one, as it is just about as small of a pedal as you will see out there.  It is rackable since it is a foot pedal.

No one should have trouble figuring out how to use the Proco Sound Turbo Rat.  It has some of the most basic parameters possible for a distortion pedal, and are ones that are pretty ubiquitously found on pedals of this type.  The Turbo Rat has three knobs - one for distortion, one for filter (EQ), and one for volume.  If you look at most simple distortion pedals, these are the three parameters that they will have, so if you've got experience with any distortion pedals, chances are that you have seen this sort of configuration.  I've never seen the manual for the Proco Sound Turbo Rat, so can't really say anything about it.

The sound quality of the Proco Sound Turbo Rat is comparable to the original Rat, but definitely has more oomph.  I've used the pedal for recording with a 1976 Fender Twin Reverb amp and a Fender American Stratocaster.  While the Turbo Rat wouldn't be the distortion pedal that I would use in every situation, when the pedal works, it works very well.  The sound can be described as thick, full, and vibey distortion pedal.  It almost has kind of a fuzz sound, but is a bit more transparent than your average fuzz pedal.  If you like the sound of the original Rat, just imagine that with more beef.

While the Proco Sound Turbo Rat isn't a pedal that I have in my live guitar rig, for occasional use in the studio for certain situations, this is great pedal.  This isn't to say that this pedal wouldn't work for live shows too, its just that for the sound that I'm going for, I don't find it necessary.  I can definitley see people using this pedal all the time for heavier genres of rock though.  The price is a bit less than $100 USD, so it is only a tad more expensive than the original Rat.  If you're a fan of the series of Rat distortion pedals, or are just looking for a thick distortion pedal, the Proco Sound Turbo Rat should be on your list.