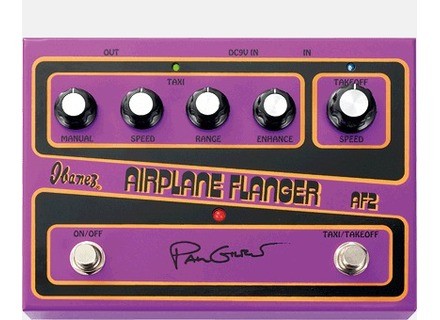 View other reviews for this product:
This is the new Airplane Flanger released by Ibanez for Paul Gilbert. The flanger is an attempt to help replicate that old school A/DA modded flanger that he used to use for special divebomb effects and what not. The pedal itself is roughly the same size as the old school A/DA, and it has some slightly similar features. There is a knob for manual, speed, range, enhance, and it has a special knob for the "Take off" feature which makes the thing sound like a plane getting ready for...take off. Cleverly named, I know. Aside from that, it has your basic inputs/outputs as seen in most other flangers.

The pedal itself is built quite nicely. It's sturdy, and it could easily withstand some long tours without much of an issue. The switches are pretty good, but I'm not sure how good they are compared to some of the higher quality switches that the more boutique builders tend to use. The knobs are easily accessible, and while the names of the knobs are somewhat funky, it's pretty easy to understand what they do once you start turning them. The manual in this is laid out fairly nicely, and it helps walk you through some of the different settings, but I tend to just prefer twisting knobs until I hear something I like. Setting it up is as simple as setting up any pedal. Just plug this into the front of your amp, and you're good to go.

The sound is where it's kind of lack luster. For a basic flanger sound, it does a pretty decent job. It's not the thickest or most 3D sounding flanger on the market, that's for sure. The old school A/DA also sounds way better than this. However, this is pretty good for that standard flanging sound. The one thing that was a real disappointment was that take off feature I spoke about earlier. It seems to be on some sort of fixed interval, and it never works quite like I want it to work. It's just like a fixed setting that keeps repeating itself or something, and it doesn't emulate that old school Paul Gilbert sound that I'm so used to hearing on his Racer X albums.

The pedal itself is decent if you want that basic flanger sound, along with a few other features. However, there are better flangers out there for the money. One issue with flangers is that one doesn't seem to do everything you want it to, and the one or two pedals out there that DO happen to have all the features you want cost a fortune. I tend to have a few different flangers around for different tones, and this kind of setup seems to work better for me than buying one huge, complex flanger that costs an outrageous amount of money. In short, decent, but don't expect to get that famous Paul Gilbert A/DA sound out of this.
Did you find this review helpful?yesno
Cookies help us improve performance, enhance user experience and deliver our services. By using our services, you agree to our use of cookies. Find out more.