Is there anything more annoying than a guitar that won't stay in tune? Most guitar lovers will say no. While there are several factors to consider, the quality of the tuning machines plays a crucial role to guarantee stability and comfort. But there are so many options out there that it's hard to make a decision. We polled 427 members of the French version of Audiofanzine to come up with these rankings, and we thought we'd pass the results on to you. We'd love to know which are your favorite tuning machine heads, so please use the comments section to let us know! 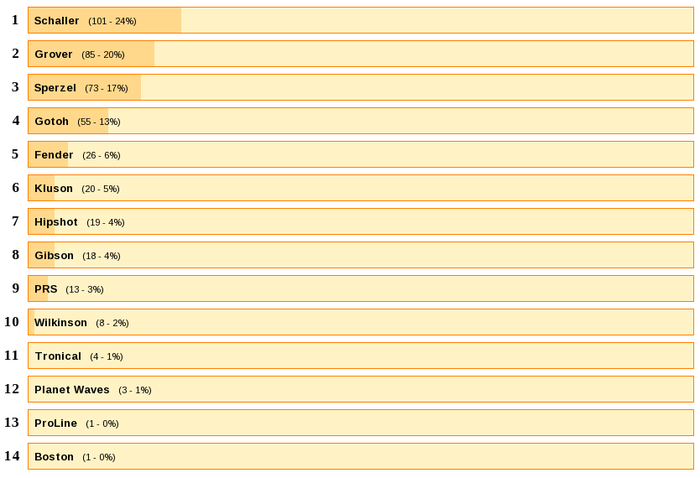 No brand was voted unanimously. Nevertheless, four manufacturers dwarf the competition, including giants like Fender and Gibson. Here are the four winners:

Schaller has been providing spare parts for guitar for over 65 years. The German brand offers bridges, vibratos, pickups, and tuners, obviously. Prone to innovation, Schaller are the inventors of locking machine heads. 100% made in Germany and boasting clients such as Fender, PRS, Gibson, Martin, Gretsch, and even Suhr, it's no surprise that Schaller nabbed the top spot among the voters.

Runner up in our poll, Grover is the Schaller of the USA. Established in the 19th century, the brand offers spare parts for stringed instruments. It became quite famous some years ago when it started introducing the first-ever enclosed, permanently lubricated machine heads. Grover is so confident of the quality of its products that their tuners have lifetime warranty. A significant feature that certainly explains why the brand ranked so high in the poll.

Sperzel is the second US brand in the list. Established in 1977, the company would quickly establish itself as an important player in the machine-head industry earning a very good reputation among guitar players. It has nevertheless remained less-known than most of its competitors, despite some interesting innovations like the Trim-Lok locking system. Finally, also noteworthy is the fact that Sperzel provides custom service to respond to the needs of the most demanding musicians.

Not everything stems from the USA or Europe in our list, Japan also grabbed a spot! Masao Gotoh opened a research center dedicated to strings for instruments in 1950. Soon afterwards he started selling strings for violins primarily. 10 years later Gotoh took a more commercial and industrial turn and started manufacturing all sorts of spare parts. Often associated to Fender guitars which have been sporting them for years, the manufacturer has become a giant in the industry with one of the most comprehensive catalogs around.

Other brands included in the poll: