Recording electric guitar - With or without effects?

Today we'll tackle a rather delicate topic: Should you record with or without effects?

If you've been following this series, you probably recall we already addressed this issue when discussing the recording of a bass guitar. However, even though I strongly recommend you to re-read that article because it addresses many concepts related to what you are about to see, I still think it's necessary to look into the issue again for several reasons.

First of all, while this topic is a sensitive one for bass players, it is even more so for our beloved shredders. In fact, the latter usually have a very strong attachment to their pedalboards, possibly more so than any other musician. And don't take it as if I'm being judgmental here, it's something I've been able to observe empirically throughout my life as a musician. Consequently, I don't think it's a waste of time to dedicate a couple of articles to the topic.

Second, while the same recourse we discussed when talking about bass guitar applies here, namely direct recording instead of the "classic" miking approach, you can take the whole thing even further in this case.

Finally, do note that even though it seems pretty logical to talk about this recording method at this stage of the guide, it doesn't only apply to electric guitar and it might be interesting to consider using it when tracking other instruments using an effects signal chain that corresponds to the criteria described in the following paragraph.

To understand the technique you'll be seeing next week, it's important to distinguish between three effects families.

The first is made up of what I call "fixed" effects, for a lack of better word. I'm talking about distortions of all sorts (classic distortion, overdrive, etc.), EQs and similar utilitarian tools (booster, compressors, etc.). In short, effects that do not evolve in time.

The second one comprises all sorts of effects involving a transformation of sound related, in one way or another, to time and, hence, rhythm, but whose parameters can't be modified in real-time by the musician. This obviously includes lots of delays, but also reverbs, modulation effects (flanger, phaser, chorus, etc), and even some filters (auto-wah, etc.).

The third and last family is formed by time-based effects which can be controlled in real-time by the musician. Like wah-wah and volume pedals, as well as all effects with a "Tap Tempo" function and/or an expression pedal. 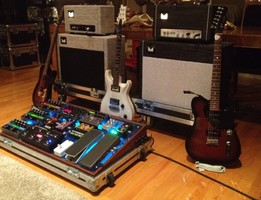 After this brief introduction, I'll try to detail why I make these distinctions when recording. And it basically all boils down to the "reliability" inherent to each family. What I mean by this is that if you dial in correctly any effect from the "fixed" family, they are extremely reliable by nature. To be clearer, once you've found the right settings, the result with that effect won't vary too much from take to take.

But it's an entirely different story for the effects of the second family. By definition, their result varies a lot in time, which might entail lots of inconveniences later on, especially when editing! Imagine for a minute a song whose tempo changes and/or varies from one moment to the next, be it willingly or not. This kind of effect won't necessarily follow the changes, which will result in hardly useful takes. Likewise, for a song that goes like clockwork, it's hard to perfectly synchronize such effects. I remember a session where the musician used a vintage MXR Phase 90-like phaser. It worked really well live, but when it came to tracking it, it was a true nightmare because the effect was never in sync with the song, so the guitar sounded a bit bizarre and even unpleasant at times. It took a lot of comping to get it right and even then it wasn't an easy task because the phaser wasn't necessarily modulating the signal at the same level at the same time across the different takes. As you ca imagine, it was hard to get them to work together without the listener noticing it.

Finally, the effects of the third family can be as reliable as the musician using them. If he/she is an expert, it shouldn't be a problem. However, if he/she has a hard time coordinating hands and feet, it might prove much more difficult to get decent takes for the production.

So, to wrap it up, pedalboards which only include pedals from the first group can be easily recorded using a mic-in-front-of-the-amp/direct recording combination, like a bass guitar. But for the two other effects families there are ways to optimize things to make your life easier later on. How? We'll see that next time...!