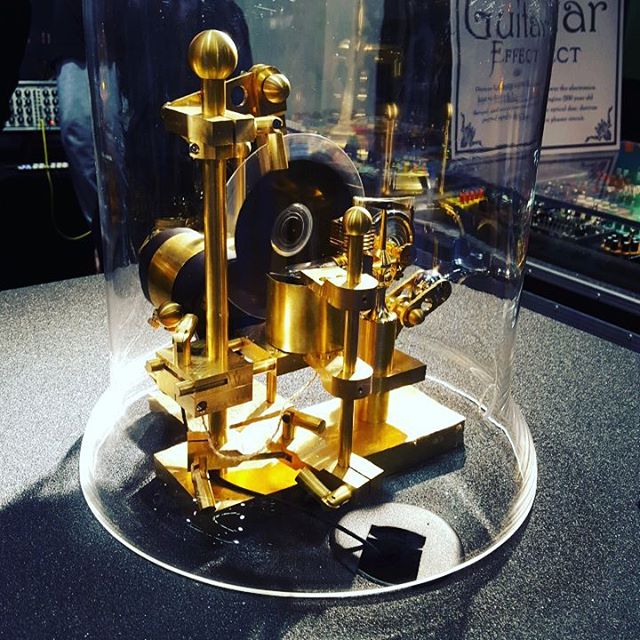 Phaser for Guitar from Zvex .

For those who consider using tubes in guitar effects is still not vintage enough, ZVex has come up with a new concept: candle-powered effects.

ZVex announce the Candela VibroPhase to be the world's very first candle-powered guitar effect. Why do I have no problem at all believing that?... But while the concept might look surprising, it starts making sense when you start examining the concept in details: the candle drives both a pair of solar cells and a Stirling heat engine that spins an optical control disc, which design can be controlled by the user - so both the candle's light AND heat are being used. Hence, the regular interruption of the light's captation due to the disc spinning results in a modulation effect, and the sound is said to be reminding of that of a Univibe in an even more adjustable version, with a sound sweeping from subtle vibrato to Leslie-like phasing and a speed range announced as wider than any previous ZVex product released until now.

Technically, there are two gear ratios on the Stirling engine that cover about a 20:1 speed range when used with the eddy current brake, which is a 1" diameter neodymium sphere magnet. Users can design their own modulation patterns on the interchangeable optical control discs, which quickly pop in and out of the machine, making it possible to create one's own LFO wave shape and rhythm.

While this model is (so far?) only a prototype, it may both raise the interest of steampunk-loving musicians and drive crazy those who spent years trying to reduce drastically the size of their pedalboard. While the technical prowess is certainly to be admired unanimously, it still not spare us a future controversy: can it technically be admitted for acoustic/unplugged music?

More details at ZVex's website and in the following video: