An active pickup is a normal pickup ─ but active. Got it?

Let's go back to the basic principles of a pickup, i.e. the oscillation of the string in a magnetic field that generates an electrical signal of very low voltage and intensity. The device is entirely passive, which means it doesn't require an electrical current to work. But the signal is very weak and has a high impedance. In other words, it's very vulnerable to all sorts of electromagnetic interference.

So, why not simply amplify the signal before it begins its long journey through the cables and into the amplifier, sometimes passing through effects pedals along the way? To amplify an electrical signal, you need to feed it into an electronic circuit that supplies it with more energy (the more voltage, the more intensity) and reduces its impedance ─ in short, that makes it louder. That's what DI boxes are generally used for, both onstage and in the studio. But to achieve that you need an energy source, like a 9-volt battery, which is small enough to fit inside a guitar and powerful enough to feed a power-hungry electronic circuit. And following the concept to the letter, you should amplify the signal as early as possible, i.e. at the output of the coil, inside the pickup itself. So, an active pickup is basically the same as a passive one, but with a built-in preamplifier. 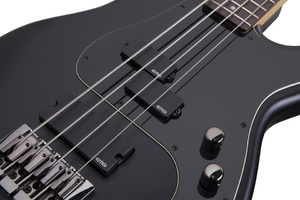 The first manufacturers of active pickups (EMG) took this simple idea and started to offer pickups that were somewhat strange from the point of view of the coils and magnets. The pickups were clearly underwound, with a number of turns that was much lower than on a passive pickup. In theory, this results in a pickup whose dynamics and frequency response are larger than those of a traditional pickup, but the tradeoff is a very weak output signal, much less powerful than that of a passive pickup. If you were to use active pickups passively, their sound would be completely veiled by unbearable background noise. But since there is an active circuit boosting the signal at the output of the coil, the pickup's output signal (pickup + active circuit, in this case) is at least comparable to that of a traditional passive pickup, or even higher. And, above all, it's much less susceptible to interference while travelling through cables. This kind of design could actually be used for all sorts of magnets and coils, by calibrating the active circuit built into the pickup to compensate for the output level. I imagine that EMG tested quite a few prototypes before settling on their design.

Are active pickups "cold"? That's a whole different discussion. EMG positioned its brand by highlighting the extended frequency response and higher output volume of its first products, back in the 1980s. A shorter winding compensated with an active circuit, ceramic magnets — an innovative mix of ingredients at the time, which resulted in a different sound. Afterwards they started applying the same concept to more "vintage"-oriented formulas with alnico magnets, always taking advantage of their active pickups having lower sensitivity to interference. Is an active pickup necessarily "dryer", "colder" than a passive one with equivalent magnets and coils? I'll let your ears be the judge of that, if you can actually manage to disregard the rest of the path between the pickups and your ears.

You should be careful not to confuse an "active" pickup, according to the principle described above, and a so-called "active" instrument, which incorporates an electronic preamp circuit. In the late '70s, some active circuits (preamps) were introduced, mainly among bassists, although some guitarists adopted them too (David Gilmour had them on some of his Strats, for instance), which aimed to provide two services:

Conversely, a guitar or bass could feature active pickups while the rest of the electronic components are passive (volume and tone controls), which means they don't need a power supply to work. The passive components (potentiometers) are adapted to the output volume and impedance of the active pickups, but the electronic circuit itself doesn't require a battery, although the pickups still do.

You can obviously combine active pickups and an active preamp circuit in the same instrument. Do note however, that in most cases, these preamps are specifically conceived to handle the signal of active pickups, so they can't be used on other instruments with passive pickups. 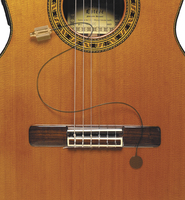 This rundown wouldn't be complete if I didn't mention other alternatives. In the electric or acoustic-electric instrument category, we are essentially talking about piezoelectric pickups. Without going into a lot of detail, the principle behind these pickups is to capture the vibrations of the instrument, not the oscillation of the strings in the magnetic field. That's why they are not dependent on the type of strings and they are usually found on instruments with steel strings (on so-called folk guitars and acoustic basses), but also work with classical guitars with nylon strings, as well as with many other traditional stringed instruments from all over the world with strings made of all types of materials. As long as an instrument vibrates, a piezoelectric pickup can be used to capture the vibrations and transform them into an electrical signal. And this includes solid-body instruments. Some electric guitars and basses feature piezoelectric pickups to produce a more "acoustic" sound. [Editor's note: That's ironic, considering that many acoustic players grumble that piezo pickups don't accurately reproduce the acoustic tone of their instruments.]

And there are other alternatives to magnetic pickup systems: Some manufacturers have developed optical sensors, which transform the motion of the strings in an optical field (as opposed to a magnetic one) into electrical current. This technology has matured beyond the experimental stage, and can be found on products like the Lightwave basses, for instance. It hasn't enjoyed too much success so far, but the results are far from being uninteresting.

Finally, the goal of capturing a vibration mustn't necessarily be to produce an electrical current, but rather to generate data, like with MIDI sensors, which are are based on piezoelectric principles, but convert the data from every note played (pitch, duration, dynamics) into a corresponding MIDI signal (pitch, duration, velocity). At the crossroads between the acoustic world and the machine realm, you still need to capture the vibrations that produce sound before being able to process them.

In this series, I have tried to give you an overview of the pickups for electric instruments. It's important to emphasize that none of these devices are technically considered to be microphones, properly speaking, i.e. a device that picks up the fluctuations in air pressure at a given moment ─ in other words, sound. When you think of it, the process of transforming a mechanical oscillation into electricity, and then taking it through different circuits that modify it before finally feeding it into another device that transforms it back again into a mechanical wave that displaces air until it reaches our eardrums seems so banal, that we often forget how complex this phenomenon can be. However, I think it's quite stimulating to take it all apart and analyze it bit by bit from time to time. Now, take those pickups, circuits, and cables and start making something exciting and fun!

Log in
Become a member
Viewers of this article also read...
learning How Magnetic Pickups Are Built and How They Work
learning The Top Brands for Guitar and Bass Cables
learning Impressive Compression
learning Gadgets for Guitar Players
learning A video trip to D'Angelico's NYC headquarters
learning Let's Get Small
learning We interview the author of "Beatles Gear: The Ultimate Edition"
learning How to Compress a Guitar or Bass
learning Recording electric guitar - Alternatives
Voir tous les dossiers