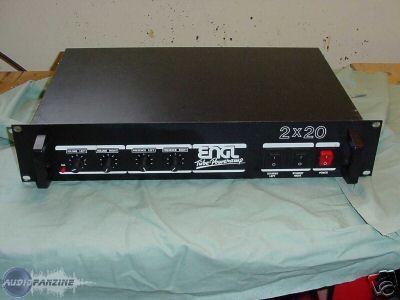 Ben volume and channel presence. Knob of the real progressive and precise. I have not seen the manual I had OCCAZ.

RAS on this point.

The engl gives life to the v-amp, the sound is good monstruesement. In addition, the presence of -15 dB switch in between can be quickly saturate the power stage. So by repeating I just put myself a 5 / 10.
The presence of knob can really expand the sound pallete.

Sounds clearly doing well, enough slamming. Not very flattering, but right. At the limit we do not care, no one buys for its clear ENGL ^ ^

In saturation, the cot right engl makes her very precise, even with fairly extreme settings. I feel like its a "living".
As said, the sound is "a good place" (rah hard to express themselves with words). each note along well. It became a real pleasure to play ^ ^

I've had two weeks. I got a 400 on ebay. C Even if a bit expensive, I regret not absolumen. It's built like tank. The unit must be 10 years, she has some superficial scratches on top. I will give him another 20 years to live so it exudes solidity.

It is the only Poweramp that jai essay. I've heard quite a few times a Peavey 50/50, but not enough to compare.
Less than a mesa, but different. In my opinion better than a marshall. It is simply not found, I was lucky and I let go ^ ^
00