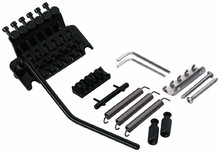 The Top Tremolos for Guitar

Far from being a simple accessory, the vibrato has become an essential element in the playing style of many guitarists. Be it for subtle modulations with clean sounds or dive bombs with fat distortions, tremolo bar fans often look for specific types of vibratos. 403 members of the French version of Audiofanzine took part in a poll to choose their favorite type of Whammy Bar, and we thought we'd pass the results on to you. Do you agree with them? Use the comments section to let us know!

According to our poll, most people seem to prefer either one of two types of very different vibratos: the Bigsby Vibrato and the Floyd Rose. At the top of the list we have tradition and modernity rubbing shoulders, while ball-bearing, two-point floating, Jazzmaster or Jaguar models come out pretty even. The difference between them is just a couple of votes:

The Bigsby tailpiece is one of the first vibratos to have made it big in the guitar world, back in the 1950s. Initially, Paul Bigsby set out to improve Merle Travis' Kauffman Vibrola. But given how difficult it proved to keep the guitar in tune, he decided to create a new system from scratch. Its operation was very simple: a spring-loaded arm rotates a cylindrical bar in the tailpiece to which the strings are attached. Thus you can vary the string tension to create vibrato and other pitch variations of a couple of semitones up and down. While the Bigsby is not famous for being able to hold tune, its "vintage" look and subtle effectiveness make it still today an object of desire. Many models by renowned brands such as Epiphone, Fender, Gibson, Gretsch, and Guild feature Bigsbys.

Like Bigsby, Floyd Rose is above all the story of a man. Impressed by the way Jimi Hendrix and Ritchie Blackmore experimented with their Stratocaster tremolos, young guitarist Floyd D. Rose would soon get tired of the detuning produced by such practices. The old six-point system doesn't really like being abused. After analyzing the system, Rose realized that blocking the strings at the nut might help hold tune. After a first test with superglue, he puts himself to the task of developing the famous locking nut. Enter the Floyd Rose locking tremolo. Soon enough, legends like Eddie Van Halen would take hold of the invention. It's actually rumored that Van Halen even helped perfect the Floyd Rose by taking part in the design of the Fine Tuner, the tiny screws that allow you to tune the guitar from the bridge. Today, the Floyd Rose rules the world and it's a distinguishing symbol of heavy metal and other extreme genres. It set the foundations for a new way to approach tremolo bars and it wouldn't take long for many brands to follow suit.

This trio lands the third spot in the list. Just like Floyd Rose, many of our readers voted for locking tremolos based on ball bearings and similar systems. With these mechanisms, the knife edges allowing the tremolo to pivot are replaced by much safer and durable bearings. Be it the Kahler or Vigier systems, we are probably talking about the most sophisticated among "extreme" tremolos. The two other systems that share the third place are more classic. The two-point tremolo replaced the traditional six-point system on many Fender models. Given its floating character, it allows for larger variations. The threaded arm also gave way to a more practical pop-in one. Finally, the list is completed by an unexpected outsider: the Jazzmaster and Jaguar type tremolo. Fixed onto the tailpiece plate between the B and E strings, the arm activates a spring hidden underneath the plate that makes the metal tip to which the strings are attached pivot. This system is especially beloved by Surf Rock fans and features a mechanism to lock the strings and thus hold tune even if a strings breaks. But be careful because you need to set it quite carefully for it to be effective and to place the non-threading arm correctly.