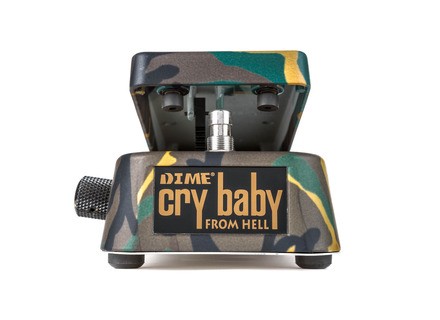 Buy this productView price information >
View other reviews for this product:
So, as you probably guessed, this is a wah-wah, but not like any other ... it is the signature model Dimebag Darrel Mr. (Pantera guitarist for the uneducated).
Visit the right side of this beautiful pedal:
It is a rotary switch to the right of the pedal to select the frequency of the wah (it is a 6 position selector identical to that found on the Crybaby 535Q).
We also work in the right of the pedal input jack for the instrument and the entry for the adapter.
There is also the BOOST button (the small red button) on the right side of the pedal, which we will return later.
Now to the left of this machine fantastic
-It is on this side of the Crybaby From Hell three small buttons, around the same size as the button BOOST, each with a specific task:
The first rule-the sound of the wah (the button is turned to its maximum, the higher your wah sound like a human voice ...).
-The second function is absolutely brilliant: it allows to adjust the level of BOOST: when it is switched on, the little button BOOST (quoted above) gives you an increase in the volume which can range from 0 to 17 decibels! Only default, Boost does not work only when the wah is engaged ... it remains inactive if you do not use it ... shame!
-Finally, the third potentiometer adjusts the frequency of the wah (yes, again), but this time more finely than the big button on the right side.
-An interesting features of this wah lies in the two jacks found on this side of the wah (what? Two jacks on the same side? But what is the other who is on the other side then?) .. . good try to follow because it is not always easy to understand, much less to explain ...
-One of the two jacks is output, no matter what. The second, however, can be used as input if you enable a small switch located in the interior of the pedal (the default yet another, but found a way to activate the switch without removing the plate below, well, not entirely anyway). The advantages of this system are that the pedal can be used as the only pedal of your pedalboard while eliminating the need to take a walk around the pedal with one of your jacks (it's good? You always follow?) . This can also be useful if you put your wah at the end of a pedal-rich effects, avoiding once again to turn the jack around the pedal, thus preventing it gets stuck to the interior of the pedal gene and the operation ...
-Finally, a nice touch from the folks at Dunlop: two lights (LEDs) on the back you indicate two things: a green light when the wah is on, and red when the BOOST is on.
And for people making the metal scene, that you're there already happened to have beer on your feet and not be able to hook the rubber surface of your wah? Hey bah gentlemen, do not worry about this problem because Darrel M has requested for its pedal surface identical to that of a skateboard grip ... and voila! it more slippery!
Note also the nice logo "CFH" on top (original "Cowboys From Hell" for non-fans of Pantera).

Nothing to say. Like any wah. One little quack, the series of three buttons to the left of the pedal is not always recognizable ... but hey, just remember them, and the rest is cake!

Whether you're a fan of Pantera or not, you'll get your taste! Whole range of Dunlop Crybaby be imitated here. So you are the funkiest and the hardest funkeurs steelworkers, this wah will not disappoint!

Apart from a couple of things that could be improved, this pedal is perfect ....
Okay, it costs a bit expensive ... but at least you'll ever have in a purchase for the rest of your life! was less than that do not like it, but I doubt very much much ...
If c good enough for Dime is more than enough for me!
See the source
Did you find this review helpful?yesno
Cookies help us improve performance, enhance user experience and deliver our services. By using our services, you agree to our use of cookies. Find out more.