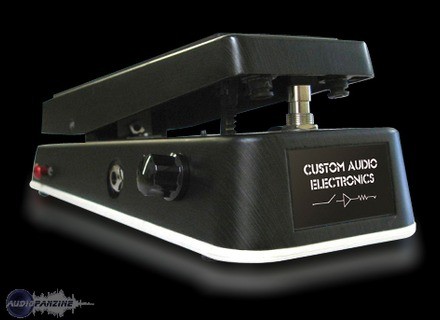 
You don't usually see CAE making products with oddball features like this. An inductor switch to change the tone and a side mounted kick switch for the boost. Of course it has true bypass since it's a CAE product. They hold most of their products to a pretty high standard of quality both in the build and spec areas of construction. It's got an internal Q control. Basically most of the features you could want in a wah pedal.

It feels like a solid build. I'm not surprised though. Wah pedals usually don't break on me but at time I've had problems with traction calibration slipping over time. We'll see how this one fares. The sign on top of the pedal is good for live situations where you can't quite see the otherwise dark surface in a dark stage environment. Travel is good. Feels a lot like the equivalent dunlop build.

The inductor is a cool concept. It's a bit like having two wahs in one. One of them is more of a vintage high end focused voicing. The other is a kind of low end modern thing good for solos because it cuts out a lot of the harshness you usually hear.

Other than that it's basically what you would expect. Boost switch works surprisingly well although I really don't use it much. For the price this is a fairly good deal. Great build quality too.
Did you find this review helpful?yesno
Cookies help us improve performance, enhance user experience and deliver our services. By using our services, you agree to our use of cookies. Find out more.