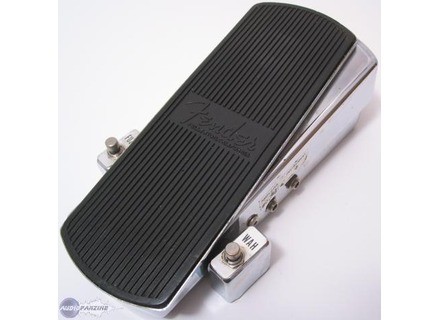 View other reviews for this product:
- What are the effects or types of effects available?
It's a fuzz pedal and wah-wah, we can use the combined effects or not.
- What technology is used? This is the analogue
- Are they edited? Via an editor Mac / PC? Not
This pedal really well (all chrome) and the production is good quality. It is heavy.

- The general configuration is it simple?
Two buttons: one to initiate the fuzz and the other wah
This is my first so it's pretty subjective wahwah because I have everything to learn from its proper use. The use of the wah effect is neutral when the pedal is flat. The wah happens when you go up the heel when you release the accelerator as the car. I know the classic wah work in reverse so it can confuse users of long standing. The fuzz is managed by pivoting from left to right is the plate or foot. On the left the effect is at least right at the maximum. There's also a screw behind the pedal to adjust the overall volume. It can therefore be used in boost if desired.

I use this with a telecaster fuzzwah US fender amp and a hotrod. The rendering is really great. The effects are super good. The growth mechanism is quite hard, so to make funky effects like shaft of Issac Hayes is a bit hot (at my level of course). The fuzz acts as a volume pedal which injects a fuzz effect. It's really great. One thinks immediately to the hendrix or ledzep. Perfect for bringing the good feedback vintage at the right time. As in the AF test, which is really cool is this sound that emerges when the wah is engaged fully with the fuzz, it is thought to result from ledzep No quarter. And finally the icing on the cake is that there is a switch that allows to set the fuzz is then wah or vice versa, that really sounds to exploit. In fuzz wah is more aggressive and nasal, with wah fuzz is softer.

This is my first wah and I have not tried the other. I use it for a week. I was looking for a fuzz at the base and my salesman showed me this pedal. It was a real stroke of heart especially during the test. It not only has class, but the sound is super good in mind vintage year 70. What I like most is the wah and fuzz that can be combined. I think that use stage, once mastered is the big beast killing! (It works the calves). The sound is vintage, the wah does well is being asked without going to extremes and ditto for the fuzz that has a super grain. Paid € 185, I bought it after a sale of sale on deposit amp so I did not feel the hole in the wallet, but I understand that some find it a bit expensive. I think I do it again this choice with the experience because it will quickly become indispensable to me. A really try. If my opinion changes, I'll do an update.
See the source
Did you find this review helpful?yesno
Cookies help us improve performance, enhance user experience and deliver our services. By using our services, you agree to our use of cookies. Find out more.