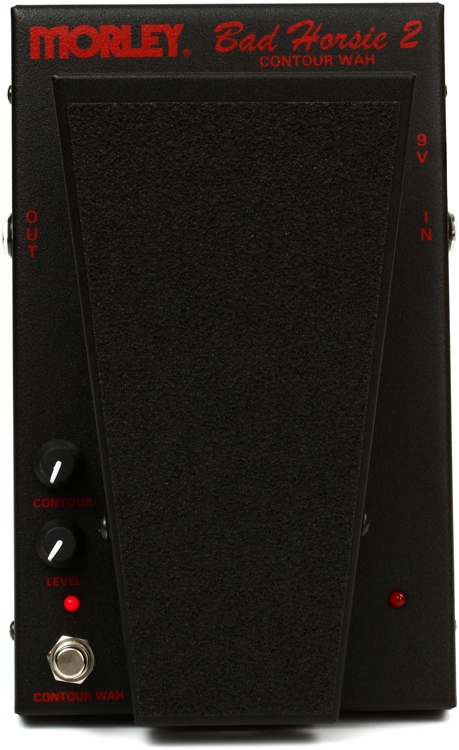 View other reviews for this product:
Rockmonster
Publié le 07/19/08 à 19:58
Wah wah baby.:P
This is an all analog foot pedal with an optical control for effect oscillation. No USB, MIDI or other crazy editing, but controls for &quot;Contour&quot; (Q/range) and level...for boost or cut...altho' I can't imagine cutting volume when you engage a wah...durrrrrrr
Spring loaded...step on it to engage. Wiggle foot. Yay.

This pedal is very easy to get a great sound. I don't even think it had a manual...not that it needs one... Perhaps it has more options than a normal step on-it-and-play wah..but it is something you can set and forget. Find the sound you like and go.

You know...this wah will not please everyone. It is not a Fasel wah tone, per se....it CAN do a true wah sound..but not that 70's porno soundtrack wah..or that &quot;Shaft&quot; tone...but it works very well on modern rock tones and loves distortion. I have a Vox Clyde Mccoy reissue on my board as well...and if I need those tones..I use that. The BH2 can do approximations of those tones in a pinch..but will not deliver for purists. I have played a lot of Morley wahs in recent years and have to say this is the only one I have liked or bothered buying...( I used to have one of the huge chrome jobbies back in the 80's..it was decent..this is better.)
I keep the Contour control basically dimed for the widest range and keep the level flat so that it does not give me any volume spike. I have channel switching for that on my amps/rigs that I set for lead boosts..since I don't use a wah just during solos....but a good function for those who DO only use it for soloing.
I love this pedal. The tone is modern. Smooth on the high end...smoother than my Clyde...which might be interpreted as not as much range. This IS true, but it seems to work better with distortion.This limitation is realized during clean stuff and even playing bluesy wah lines, but works to great benefit with modern gain and for shred. Man, I love having both wahs. It is probably best to look at this as almost a different effect than a common wah....probably not what most people wanna hear, but that is the tradeoff. Remember..this is a signature wah....so it does something very specific to the artist who helped design it. Will it make you sound like Steve Vai? Nope. If you recreated his whole rig, then yes..this tone IS in there. This wah does what it is supposed to!

Been using this for a couple months...but I know what I like, and this foots the bill. The spring loaded feature is awesome. I love not having to make sure it clicks to engage. I was actually getting ready to buy the Fulltone Clyde Deluxe and feel quite happy I got this instead... ( the only reason I say that is because I have the Vox...otherwise this will not get those type of tones..but by the same token..the Fulltone cannot get these tones..the tone from the Bad Horsie is exclusive to the Bad Horsie, for what it is worth. You might love it..or hate it.)
I think the price is great. This thing is bulletproof and sounds great. How can you beat that? Unless this proves to be mysteriously unreliable, I will always have one of these...or if I stop shredding. :O
00