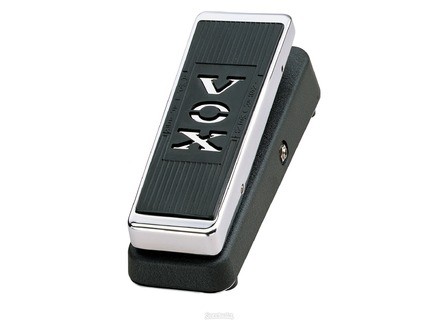 View other reviews for this product:
Vox Wah made in China.
Analog
A jack input for guitar
An output jack to the amp
Pressing the pedal forward on the switch to enable or disable the effect.
A basic wah!

The sound is good, that of a typical 70's wah.
I prefer it to that of a Cry Baby, it's just a matter of taste (I find that there is more range in the wah that is more "liquid").
For Funk I practice I love.
I use a Tele and my 62 Reissue Strat US Std, a real pleasure

I put enough because after one year and a half of use (1 Repeat / week 2H, home exercises + some concerts) it started to sputter ...
It's not too noticeable group (though) but if there is a track record that is just unbearable ...

and disappointing.
The sound is good but not robust pedal (and I'm not a bully with pedals ...)

I have a JH, tried Morleys, Cry Baby, I hooked the sound of the Vox ... but I have used it a year and a half before it starts to sputter and since I only hear that when I play ...
In addition I have added a felt pad for engagement / disengagement is done properly after a year ...
But I like the sound so that I almost redeem.
Apparently I'm not the only one to have observed this phenomenon on the Chinese version of this wah, 80 € for 1 year and a half of fun and frustration I finally abstained.
So I bought another more versatile wah: Wowee Wah G-Lab (https://www.youtube.com/watch?v=XOrUS8iGsT4) meets me at the moment.
I kinda broke my piggy bank but this wah is indestructible ... I think (for heavy use anything to say for a year and a half that I have).
In addition there is an effect trigger mode when you set foot on it.
In pieces that alternate wah wah and more or solo when there is the distortion or overdrive off to return to clear what tranquility ...
Today (September 2011) I saw Dunlop Wah fate of Jimmy Hendrix who have a little look "at the Vox" without gloss cover.
We should try them.
Otherwise there is the "high" range from Fulltone example but it not cost almost 300 € for a ... wah.
I can not find the quality / reasonable price given the potential lifespan of the pedal ...
Tell Mr Vox you can not make them last a little longer your wahs?
Because the sound, we would like to keep it clean as long as possible even for a little more ...
See the source
Did you find this review helpful?yesno
Cookies help us improve performance, enhance user experience and deliver our services. By using our services, you agree to our use of cookies. Find out more.