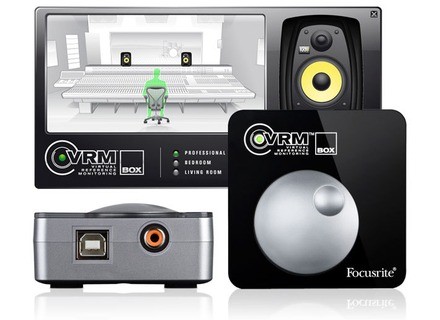 View other reviews for this product:
For years I had the dilemma of being unable to mix on my KRK V6 Series monitors due to inhibiting living conditions. No one, other than yourself (and perhaps another understanding producer) , can deal with repetitive loops due to intricate mixing. Also, this inhibits your ability to truly personalize your mix and develop your skills. I bought the VRM box because of this dilemma and on a skeptical high hope that it would fix my issue.
I originally bought the Denon AH-D2000 to accompany this box, but due to poor structural integrity (It arrived broken), I had to return the headphones. I then opted to get the $100 cheaper Shure SRH-840's due to their flat frequency response and solid design.
At first listen, I was somewhat disappointed since I honestly didn't know what to expect. I only knew that I didn't like the way that the VRM distorted the sound on my headphones. I was also confused as to what setting to mix with. However, with an attempt to mix on a certain setting, I was blown away by the translation of the mix to my KRK V6 monitors! I also realized that each setting produced perfectly good, but different translations. The mixing possibilities were vast!
As I understand, Focusrite created the VRM box and tested it with Sennheiser HD series headphones and a variety of others. However, my Shure SRH-840's work just fine and I enjoy them very much.

Overall, I am extremely pleased with my purchase. In a perfect world, I would still rather produce with monitor speakers, but we don't live in that perfect world and that's why Focusrite made such a perfect product. I had no problems installing or using, quite simply it just sounds like a filter or EQs put on your mix. . Im sure there is some technology that goes into this more than eq, but it hasnt made my mixes translate on other speakers any better or hear hidden details in different frequency ranges.
Did you find this review helpful?yesno