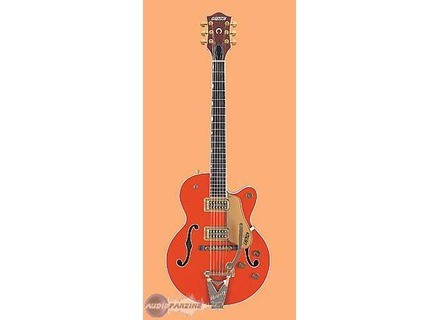 View other reviews for this product:
This American-made guitar has a gold bridge with a Bigsby Tremolo arm, a maple neck, a 22-fret rosewood fretboard, 2 Filtertron Pickups, and 2 volume knobs and a tone control, plus a master volume control.

This guitar's not too difficult to play; although the last frets generally aren't too easy to reach, they aren't too hard either, and if anything, getting adjusted to the guitar is the only thing necessary to make this irrelevant. The sounds produced by this guitar are great, too. The guitar has quite a vast range, able to get warm, clean tones when plugged straight in, as well as dangerously heavy tones when plugged through the right distortion box. It's a bit heavier than I would like, but I got used to that, too. And as far as I know, the drivers are perfectly stable. In fact, I think one of the most fun guitars to play that I've tried.

I've really enjoyed using this with my favorite amp, the Fender '65 Deluxe Reissue. I got a great warm, slightly twangy tone out of it. I was really impressed when I plugged it into a Big Muff; it had a devastatingly heavy sound that added a TON of low end chunk to the record I was working on! While it was heavy, it wasn't Metallica-esque. A good reference point might be Queens of the Stone Age (who's guitar player, Josh Homme, has a preference for hollow bodied guitars.) The range of tones depends somewhat on your range of gear, but I was really impressed with the tones that I could get out of just the guitar and the amp. It isn't perfect for my style of music (my favorite guitar is a '67 strat reissue, so that suits my music better) but I definitely get my money's worth from it, and use it enough in the studio.

I like the unexpected versatility and the warmth of this guitar the best. I think that though the guitar is expensive, it is worth it for anyone who wants to get a hollow body and doesn't know where to start. The sound is pristine and versatile. I tried a few other hollow bodies that I didn't really prefer, mostly other Gretsches, but I don't recall the names of the other models. I don't regret this choice of purchase at all and would recommend it to anyone with a wide range of styles to cover.
Did you find this review helpful?yesno
Cookies help us improve performance, enhance user experience and deliver our services. By using our services, you agree to our use of cookies. Find out more.