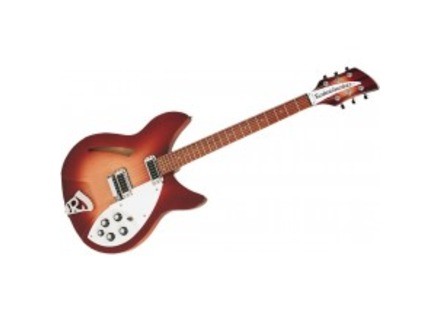 View other reviews for this product:
The Rickenbacker 330 is an electric guitar that has a semi hollow body with just one opening in the body.  The guitar has 24 frets and has two hi gain single coil pick ups.  It has standard setting controls for volume and tone and a pick up selector switch as well.  The neck is made out of maple and the fingerboard is made of rosewood, making for a long neck that is thin and easy to play.

Playing up and down the neck of the Rickenbacker 330 is a breeze, as overall I find the guitar very easy to play.  I do like playing chords on this guitar over playing lead, but both are pretty easily done as it is easy to reach the top notes.  The weight of the 330 is pretty light, and has a very cool looking body, a selling point that has made the Rickenbacker brand quite famous and renown.  The sounds possible are pretty varied, but across the board the guitar has a great inherent tone.

I have used the Rickenbacker 330 only one time for a recording session.  I used it with a Vox AC30 and wasn't the player for the session, but was engineering a session for someone else.  I was overall very impressed with the sounds that we got for the session.  While of course a good deal of this had to do with his playing abilities, but I also played around with it a good deal playing it myself, and found that I was able to get comparable sounds even though the session player was a bit more experienced than myself.  The tones are rich and creamy speaking in generalities, but there is a good deal of space here for experimenting with the different pick ups and setting controls.

The Rickenbacker 330 is just one of those guitars that you marvel at its design.  It has an incredibly cool and retro look to it, which is a look that I believe has been unchanged over the years.  The guitar certainly isn't cheap, but I'm sure that most of you will be expecting this type of price for a top tier guitar like this one is.  This is the type of guitar that you want to save up for and is one that should last a lifetime if treated properly.  I'd recommend that those who have any interest in the 330 to check it out at your local guitar shop, as most of them should have them on hand.  This is a great choice for an all purpose electric guitar for the experienced player, but isn't for everyone.