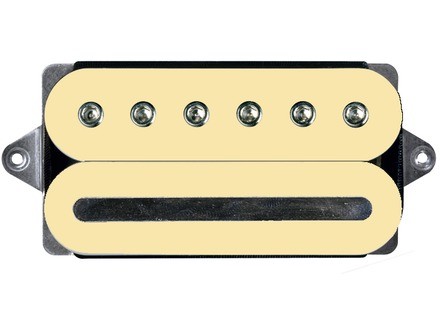 « Looks similar to the D-Sonic but sounds different »
5

Buy this productView price information >
View other reviews for this product:
The DiMarzio D-Sonic was a fairly successful pickup when it first came out, but it has a lot of issues that came with it. For one, it was quite noisy. It also has some annoying treble in the high end. The Crunch Lab seems like them trying to fix the problems that the original D-Sonic had. It uses the same half blade/half adjustable pole piece design that the Crunch Lab uses, but DiMarzio doesn’t really recommend you swap this around like before. You can, however, adjust its orientation. I found that it sounds really good with the bar facing the neck, but you might feel differently. It’s a high output pickup, but it’s dynamic and fairly tight sounding. They fixed the treble issue that I was having with the original D-Sonic. That pickup had an annoying high end spike that I just could never dial out. This pickup doesn’t seem to have it. In fact, it sounds a bit fatter overall. The midrange seems very even, so this pickup should actually work in just about any wood you throw it in. I’ve tried it in basswood and alder, but I haven’t had the chance to try it in anything else. In both cases, it sounded really good. I had this wired up to a three way switch to split the inner coils automatically, similar to how Petrucci does it. This is one of the pickups he uses, after all. It had a great split sound, and I really recommend trying that. It’s clear under high gain and very dynamic, which is something that is important these days. Today’s amplifiers have so much gain that it’s easy to choose the wrong pickup and have a complete mess on your hands. This should work for those running modern equipment, and I recommend you try it out.
Did you find this review helpful?yesno
Cookies help us improve performance, enhance user experience and deliver our services. By using our services, you agree to our use of cookies. Find out more.