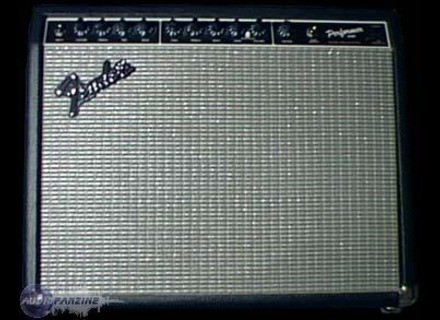 View other reviews for this product:
Solid state amp with tube distortion channel.
Actually, different from what is stated here (and that the model name wrongfully suggests), the amp is 80W RMS.
12 inch Fender speaker kicks loudly and can easily be used as PA to play in a medium-sized bar (I've done that).
I wish it had a connection for earplugs and one for a second guitar. Only connections are for instrument and for the footswitch (and the effects loop connections in the back).

The clean channel sounds great, which adds good versatility showing the real sound of different guitars and pedals. If you don't want to change your sound on purpose, it'1s a very good choice (even though Fender does not produce it anymore).
My user manual was stolen when I had to send the amp to fix the reverb that was not working. Now I'm asking Fender for a PDF copy but still no response (if anyone could send me I'd appreciate).
The distortion channel is not ideal in my opinion, but maybe it's just the valves that are old (again, I need the manual to replace them). But it's not bad, either.
It's relatively easy to carry for the power it gets.
Only con is that it sounds best when played at volume 2 and above, which is already really loud for an apartment, for instance. So for practice at home it's a bit too much.
After 15 years of use it's still in perfect shape and sound (i'm not a pro musician, so not much carrying around).

I've used Fender Guitars and a Custom-made Luthier HB Strat. For effects I've used Digitech RP350 and also analog overdrive, wah and EQ.
I like the pure clean sound of the amp, with either strat or humbuckers. With volume above 4 it really provides a nice smooth sound when played quiet and a strong kick twang / attack when provocked. Strong bass and nice mids. Treble a little too loud for my taste, but that can be adjusted in the knobs.
Hasn't got the dynamics of a valve amp (such as it's cousin the Deluxe) but clean channel is the cleanest you will get.

I mostly like the sound of clean channel. I don't use much reverb but it sounds nice, too.
Its tone when played loud is great, not so great when trying to find a volume below number 1, seems to clip down or reduce the amount of effects.
At the time, long ago, I tried other amps and I chose this because of the mellower sounds than other solid state amps like Peavey or Crate.
This amp definitely influenced my sound, and I can get the twang I want for blues and rock.
If I had to buy another one, I'd probably spend more (much more) and get me a tube amp like a Mesa or something. BUT considering the money costrain, this amp would be a good choice if I could play it loud (in an isolated house or studio).
To play in an apartment, I would definitely choose an amp no higher than 50W.
Did you find this review helpful?yesno