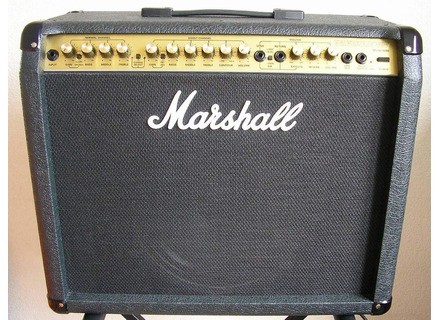 8080 Valvestate 80V, Hybrid Combo Guitar Amp from Marshall in the ValveState I series.

View other reviews for this product:
I think everything adj t said ... So read below!

PRECISION:
I do not notice saying "Be indulgent, it is a transistor."
I note from all the amps (eg a 10W transistor will be branded a note to 0, a mesa boogie lamps - or otherwise - will not killer to 10).

Trs configuration simple, we like the sound is easily found, unless it is too demanding and that requires more than this amp can who knows its limitations (Note: For the price, the limits are Gentillet, c ' is a good amp).

Its clear
Hon done everything except mdium, as with any Marshall. I would not go up that silent sound hot, but as long as you play on a guitar correctly, may do so. Crunch sound is nice too, too personal to j'vite of acute and makes good, but I think the amp is simple enough not to go rgler in dtails.

And especially with the reverb intgre, it is seen!

Disto:
I never tried to get the blues, but I think it's easily playable.
Thanks to the possibility of CONTRL contour, can be passed this amp on a lot of musical styles. You decide if the sound you are looking for your style can be obtained, but I think the personality of the Marshall is always INTERESTED. Now the saying that only Marshall to have a great disto ... It is particulire, that's all.

Personally I play punk / pop / rock ... just like Blink182 may be, sometimes with a penchant Nirvana. I really sound apprci Marshall, fits well with everything that is a little punk or grunge. I'm not a fan of mtal, but I do not think it's really for prvu, mtalleux to test it by setting the contour knob to 0. For punks, to 10. The others, well, amid what!

In gnral: very versatile, even if Marshall can be buried on the quality of sound for small to have a little more than average. But that price guarantees. on the other hand for note, I RPET, I compare with all that can be found as amp, transistor or not!

I've used for about 2 years and 6 months, it is about 3 months that I do more playing on it.

His most: it's a real amp, it has a good sound, as long as you love the sound Marshall (which is my case but I'm not big fan, my inclination is towards Mesa / Boogie) . It can find a lot of distortion diffrent, and clear sound is also quite variable.

Its less ... : Move quickly on the lack of medium to address the real problem of this amp: the fragility! a stepfather is curious srieusement he should live between 5 and 10 years for the lucky ones. Once the fault permires meetings, expect a failure SERIES (o MARCHEMAL the nickname). I have a friend who confirms rprateur see often go home. Valvestate on, there are often problem of knobs. I have not had me.

Personally I do not do more OPG, he's dead and buried. I m'achte a Mesa / Boogie F30 Combo next month (yay, I'm happy ...). In the long run, is cheaper to me, plus I would have a much better sound (bright lights amps).

DSOL to be a bit long in my comments, + + +
See the source
Did you find this review helpful?yesno
Cookies help us improve performance, enhance user experience and deliver our services. By using our services, you agree to our use of cookies. Find out more.