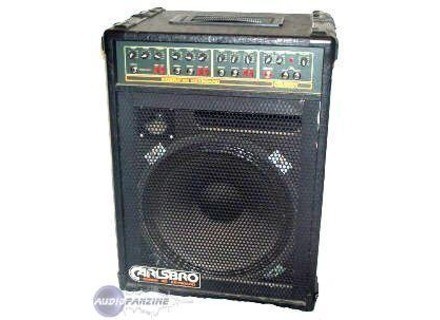 View other reviews for this product:
This is a pretty versatile Keyboard amp. The amp uses tube amplification and has several connections. The amp has three channels that can all run simultaneously. The first channel has an XLR input as well as a 1/4" instrument cable input, while the second and third channels both have just the 1/4" instrument cable input in. The amp delivers 80 watts of power. There really isn't much in the way of effects with this amp, but the KXR 100 does feature separate volume controls for each channel, a universal four-band eq (low, low mid, hi mid, and hi), as well as a universal reverb. There is also a master volume knob, as well as an effects loop. Rounding out the features are the headphone jack and the record out output (which uses A/V cable in/outs).

This amp is a great example of a transparent amplifier. That is, it really doesn't color the sound of the instrument you are using very much. This is only good in certain situations. For instance, using this amp for keyboards (it's original intent) is great because you probably wouldn't want an amp to color a keyboard sound very much. Some people like using it for vocals, and I would say that as long as a singer sounds really good acoustically (without any amplification) than they probably wouldn't sound that bad through this amp. Similarly, acoustic guitars also are reproduced rather faithfully through this amp, and their tones aren't colored much at all. I think though, that some people would want to run an electric bass or guitar through this amp, and that's where I'd have to diverge and say that this amp is a disappointment. Those instruments really need some type of amp or amp modeler to really color the sound, otherwise they end up sounding rather anemic and weak.

I think that for keyboard players who sing, this might be the greatest amp ever. However, for everybody else (guitarists and bassists) you'd probably be better off with an amp that is made for your specifications. I think that acoustic guitar players will be pretty divided on this one, it depends how much you want your guitar sound to be colored by an amplifier. I'd say keyboardists, though, should really look into it, it's a great colorless amplifier.