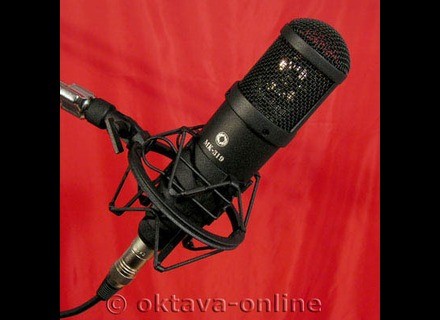 Value For Money : Correct
View other reviews for this product:
I was not exactly the Oktava MK-319, but a modified version by Michael Jolly. In other words, a OktavaMod, MK-319 PEO Standart. It's long and it said no less.
In short, many people critical of a positively or negatively the MK-319 standart, it has less than a high frequency Neumann, it is a little muffled at the top, generous at the bottom, with a very nice color, but perhaps also due to the lack of high frequencies.

Michael Jolly proposes several changes to the Oktava, for a very reasonable price. On changing basic, it reduces the layers of the cap to a single layer instead of two, in the same vein that the AKG C12. The gold capsule was visible in the super micro changed. The original pickups are also known to be quite noisy at the suspension of the capsule. The change is a new suspension of the capsule increases 30dB isolation against vibration, mechanical reasoning in critical areas of medium frequencies.
The two switches swaying a little on some microphones are switched off in order to have the shortest path between the FET and the capsule.
All electronics is changed against a new, upscale, with a wiring Evidence Audio.

I am not the beast in technique, those who want more information can go to the website of the "modifier", www.oktavamod.com

Finally, the frequency response is improved up, I did not measure but I guess that now covers 20Hz to 20kHz. I can not compare with what it was before since I ordered it changed. But I could compare it with a Neumann TLM 47 studio and an AKG 414. Ben good luck to say which is the micro to 285 Euros ...

I use it for some weeks (not long what ...) but I am more than satisfied with this purchase. I have a Groove Tubes Convertible next door (ok that is 200 francs) is nice, but nothing more ... there, you really notice the difference!

What I like most at this microphone is the slightly anarchic stuff of Russian (and no, not Chinese), or not to have a standart all the studios, or otherwise it should have is not a good studio. And yet it sounds no worse. The look, once modified, with the golden capsule becomes apparent. And of course the price, unbeatable concurrency.

What I like least, it does not qu'Oktava suspension worthy of the name for this microphone, especially at the thread. The fixing clamp is really limited, it goes, but you almost forced to move around the body of the mic (52mm diameter) and the spider goes to screw on a mic because of the two screw not always correct. Well you can have your cake, butter money, but for the dairy's ass, you have to pay more.

Before buying, I compared with other models in the same price range. The Chinese, it's more a question I did not, I have no doubt they make excellent mics, but this may be a matter of principle ... no idea. The Rode seemed a bit aggressive, they are versatile, but ultimately cold. AKG C4000 or the 414 are excellent mics for the last quoted much more versatile than the Oktava, but it also has its price. Neumann, Gefell, it's pretty, but it is out of reach for my purse.

The price / quality ratio of this microphone that plays really changed in the big leagues is simply phenomenal.

I am already beginning to put aside to buy a pair of MK-012 ...
See the source
Did you find this review helpful?yesno
Cookies help us improve performance, enhance user experience and deliver our services. By using our services, you agree to our use of cookies. Find out more.