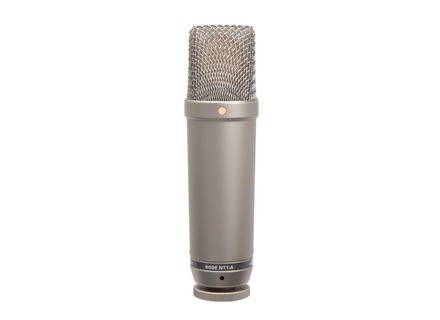 Buy this productView price information >
View other reviews for this product:
Features wise this mic is pretty bare-bones. There is no 20 dB pad, and no switchable polar patterns. The mic comes with a leather pouch instead of the metal boxes you might be used to seeing RODE's packaged in. It comes with a nice, solid shock mount.

The sound quality of RODE products is always fantastic, and this low-end model is no exception. It uses the same gold-plated diaphragm of the higher end RODE models, it just doesn't have a 20 dB pad or switchable polar patterns, hence the drop in price. It is just as clear as other RODE mics I have used, as clear as Shure KSMs or AKGs. When I tested it with RODE NT2's and KSM 44's, it was very similar in overall sound. If you are strictly recording vocals or something else that doesn't require a pad or switchable patterns, go for the NT1-A. For $199 it is a serious bargain.

Well, its a microphone, so basically you just plug it in, the rest is up to your audio interface. The shock mount is easy to reassemble, the mic is easy to install in the shock-mount, so I guess that counts for something.

This mic is very well built. It's light for a condensor, so its quite nice for your mic stand. It seems very sturdy and durable. The grill could have had a beam separating it in the middle, the way many higher end models do, but its still very solid.

I love this mic. It does what I want it to do, with extremely low noise, and it doesn't take much to warm the sound up. For the price, this is the best out there.

Originally posted on FutureProducers.com
Posted by: XL83 ( 7-, 2005)
Did you find this review helpful?yesno
Cookies help us improve performance, enhance user experience and deliver our services. By using our services, you agree to our use of cookies. Find out more.