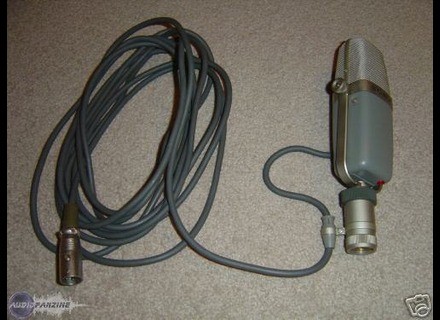 View other reviews for this product:
The Sony C-3B is the type of microphone that can be used for anything. It is a large diaphragm mic that is intended for broadcast and studio uses. I love the way this microphone sounds with more aggressive instruments with a lot of dynamics like trumpets and saxophones. With the dual switch that it has on it for omni-directional and uni-directional polar patterns it gives exactly what you may need for the current recording session. The price for this microphone is very expensive and I have only used it in a big studio where the acoustic treatments and perfect environment could be a contributing factor to how it sounds. But if I could afford to spend almost 3 grand on a microphone to have at home I would get this one in a heartbeat!

The sound of this microphone is very clean and crisp. When we recorded with it there was no need to even worry about boosting any frequencies because it puts a little boost on those mid to high range frequencies and they were cutting through the mix right away without even touching them. There is also a low cut filter and a pad switch on the Sony C-3B.
The engineer at the studio said this is his favorite microphone to record with because it works perfectly for anything and has never failed him. I highly recommend this microphone to any musician or studio that can afford to purchase it.
The pad switch is an -8dB pad witch that gives added headroom while leaving out distortion. The C-38B has a great dynamic range to pick up all sorts of vocals and instruments. I would love to see how it would sound in just a regular “home bedroom” setting and not a major studio just to see how it can compare to some higher end affordable microphones that I have. Because in the studio, there are a lot of acoustic things to take into consideration on how much better it could be making it sound. But the C-38B has become my dream microphone that I plan on purchasing as soon I get the money for it!