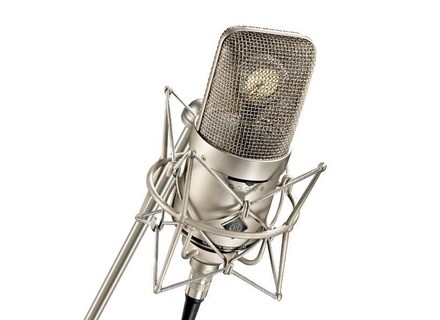 Buy this productView price information >
View other reviews for this product:
The Neumann M 149 is a tube condenser microphone designed and used in the recording studio setting. It comes with a power supply and a special cable that can only be used with this mic. It has a switch for a 9 different polar patterns and has seven position bass roll off. These both come in handy as it increases the versatility of the mic. I'm not sure what type of tube it has but it adds a tremendous bit of warmth to the mic. It is also nice to have the shockmount as it is a heavy microphone and needs to be protected and held up strong.

I've been using the Neumann M 149 for a little bit under a year and it is really a great sounding mic. It is full sounding and works with a number of different instruments. I like it best on stand up bass, acoustic guitar, vocals, and cello. It really picks up the low of a stand up bass or cello and is definitley is my go to mic for these applications. It also sounds great when placed near the resonator of an acoustic guitar as it picks up the low mids and the mids well. It has a rich tone to it and its versatility with rolloff and polar patterns makes it a great all around mic. The warmth that the tubes give off gives this mic a special quality. While I wouldn't say that it colors the sound as it is a pretty clean tone, it picks up a wide range of frequencies and acts with the tube to create a unqiue sound. While it costs a pretty penny if you're looking for a high end tube microphone. Neumann's reputation is well known throughout the recording industry and this mic is as good as any I have used!
Did you find this review helpful?yesno