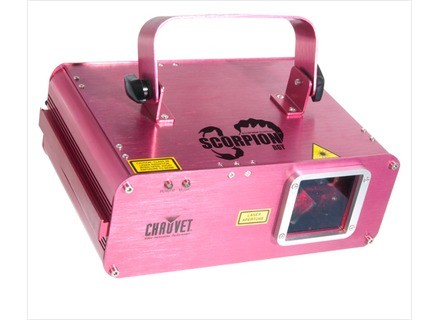 Scorpion RGY, Laser 500mW and up from Chauvet in the Scorpion series.

Additionally, Chauvet says that most of its fixtures have been fitted with Edison power linking, which is designed to make them compatible with other fixtures.

The products that were announced include a selection of new LED-based scanners, effect and wash lights, as well as hazers, controllers and lasers.

Below are a few selected products (Chauvet's full 2011 catalog is available on their website: www.chauvetlighting.com/catalog/CHAUVET-DJ-2011-Catalog.pdf.

In the effect light category are about a dozen new LED-fitted fixtures-including room-covering options with or without DMX control. Circus [www.chauvetlighting.com/circus.html] is a changing, multi-colored light with beams from five separate, synchronized pods featuring red, green, blue, white and amber LEDs. Its effects can be seen with or without fog. It has up to three channels of DMX control or can be used in a sound-activated or built-in automated program.

Sweeper LED [www.chauvetlighting.com/sweeper-led.html] and 6Spot [www.chauvetlighting.com/6spot.html] are two effect lights that feature six 3W, tri-colored LEDs and can be linked together, working in master/slave mode, designed for larger, coordinated shows. They both have sound-activated and built-in automated programs and up to 20 units can be power linked together to save on setup time, according to Chauvet. Sweeper LED has six pods of LEDs, contained in one casing, which can be individually controlled for color chases, sequences and effect combinations. 6Spot has six spot lights that Chauvet says are less than four inches and can be moved independently for room or stage coverage. It can be mounted to the 4BAR system or a universal tripod, and comes with its own travel bag.

The quad-colored effect light, Comet LED [www.chauvetlighting.com/comet-led.html] uses red, green, blue and white LEDs to shoot beams of light that cover a room. This fixture has sound-activated effects and a motor designed to spin in both directions for a swirling effect. You can link up to 80 units together instead of running cables and extension cords.

Two new soft-sided Chauvet travel bags debuted as well. Each offers removable dividers to keep multiple fixtures packed and side pockets for cables, clamps and other accessories. CHS-50 [www.chauvetlighting.com/chs-50.html] is the larger of the two and features built-in wheels and a retractable handle for transporting larger fixtures. CHS-40 [www.chauvetlighting.com/chs-40.html] has a handle and shoulder strap designed to suit different transportation styles.