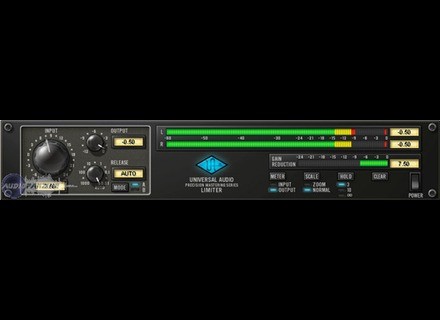 View other reviews for this product:
the facility is spotless, the problem is simply a quick click on it and autorizations in!

I use it on a Power Mac G5 Dual 1.8 ghz pro, uad the app is very stable, I use it with ProTools 7.4 on Tiger and everything runs (it's so stable that I will not update ).

I've had it yesterday and I quickly realized that this was no joke, the limiter works of hell, the more the signal and magnificent, he embellishes the mix slightly, uad it's serious I ' I also tested the LA 2A is amazing, I'm staying idiot! because I did not expect such a result from a plug, I was more on the history of septic uad plug but I confirm, it's AWESOME.

Before I used the limit of Sonnox it also and it is transparent (it is in some cases) and high amount of input gain can become hard and absorbent on the bottom of the spectrum here is any way this kind of plug should be careful of the gain otherwise it can become a nightmare.

if you have a uad card and you want a limit hesitate even one second is the class.

I do it again 1000 times this choice
See the source
Did you find this review helpful?yesno
Cookies help us improve performance, enhance user experience and deliver our services. By using our services, you agree to our use of cookies. Find out more.