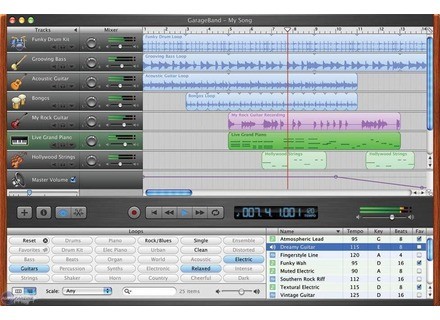 GarageBand, Loop Sequencer from Apple in the GarageBand series.

View other reviews for this product:
ILife silent pr-installed on my Mac. For now I only have one version of GarageBand.

No support of my Midi control surface in this version .. bad.

No problem except that the software s'avre greedy. I use the same plugins / instruments with Logic Pro but I put a lot of tracks Monis virtual instruments. A ten track (each with at least two external plugins), began tiring level CPU (ya-til in a Freeze V2?).

One day I started to ask a ide original fiddling and using the supplied Apple loops, and then adding my own recording guitar and vocal parts and my MIDI keyboard ... I had not realized that was leaking and operation level ide ides in no time. I have fun and spend the day sleeping well accomplished two compounds with respect to time.
So even if I'm not going to throw my usual tools more productive (Live for inspiration and composition of rhythmic structure, Logic for everything else), GB is a great Notebook luxury knows almost everything done quickly. In the end, thanks my plugins like "PSP Vintage Warmer," I had a mix that was the road (and no balls ps have in Logic, not yet for version 7 rcuprer my work).

Likes:
- Ergonomics
- Its great opportunity to work one ct caches often "toy" that is apparent.
- Apple Loops that can slow / acclerer, Pitcher leisure ...
- The ct prt employment
- The ranking tool / search loops ... THE BEST I have ever seen (that I have my whole collection of samples available for such a tool).

I like least:
- CPU consumption
- Lack of possibility of routing to the mix (no Send / Aux / Bus ...)
- No support for MIDI control software (mixing in particular).
.. but next to the price, it's a fucking tool.

computer music I started almost 10 years ago with Magix Maker PC ... reminds me of a tool, except that the audio engine and Midi can see nothing. You can have excellent quality and uen great capacity for work on GB, no doubt about it.

I have not really made a choice and even if I work on more pro (Reason, Logic, Live, Tracktion), I think I'll split the Version 2 just to have a tool that changes my inspiration changing (and simplify) my work habits. Besides the possibility to save his job in Apple Loops.

Report qualitPrix: unbeatable
See the source
Did you find this review helpful?yesno
Cookies help us improve performance, enhance user experience and deliver our services. By using our services, you agree to our use of cookies. Find out more.