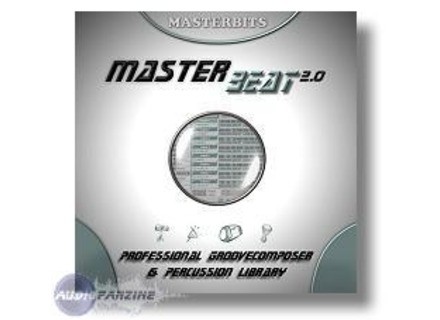 -Installation with no problems, no incompatibilities. The set is simple, very simple.

The software is very light it weighs nothing, it's a good point. I think it's really a good tool to go fast, you open it in a second program and hop on a rhythmic line in less than two.
On this side there is very convenient and the whole is fairly well organized when stability is another matter.

The software is designed to work with vst but not as much risk of trying to fly your programming. Masterbeat is completely unstable even with vst not very hungry and there's definite, I tried a little of everything of what I had, it crashes consistently.
I'm not mistaken location is clear, after a few minutes the software does not support saturated or mystery ...
From a perspective anecdotal software quits unexpectedly for no good reason ... This kind of thing happened to me when I had my hard drive relatively loaded programs, following a change of DD, I did a reset not encountered any crashes since individuals. Masterbeat behaves quite well, but the issue is not resolved vst. And the software seems to keep the fragile side
This is unfortunate

Interface depressing the tiny knobs, color fades ... It's ugly! It's like the early 90 or the concepts of shapes and colors were not at all the same. Masterbeat is Impreg this imprint, this old-fashioned side.
This is not the largest, most important is that of a mouse clik we can import any wav file, program a few seconds his ideas, a rhythmic patterns. More intuitive you do not ...

In my opinion there or Masterbeat can become interesting because apart from that you'll get very little, the tools provided only for the bare necessities and when we rejoice vst support this as it makes us his whim. Caprice unresolved and no update provided by the publisher. ... I expect the software could have been a great tool, really.
The software has also the preview of the sample in the research is more than practice it becomes indispensable. It still grows in the intuitive, it's a shame because vst for a click again it appears in the little window ...
In short I remain bitter that said some works miraculously there are at least that but it's still taking a risk, so there are recorded every 2 minutes.

What if the publisher offers a handy reverse function, a delay, an equa nag a bit, the bypass, a pan delay, the minimum in fact. We are on track 8 is enough for rhythm more or less complex, even when it gets tight at times with an instrument or two. Maximum 20 patterns we will not complain as long as it remains a BAR
With 16 slopes for example, stability, review, VST support and substantial, a review interface Masterbeat I think could really stand out and make themselves known especially considering the price, 39euros on the site. Obviously the key is there and the program performs its task well in view of its intuitive copy, but unfortunately it is not enough.
Masterbeat's still my tool of choice for all my rhythm, the next easy and straightforward to me indispensable now, I have tried other apps and I can not so quickly to my purposes, I always come back on him. I expect an update, I would be filled and I would recommend this software strongly

https://www.masterbits.de/main_e.htm
Finally the publisher, which also offers sound banks, offers a library of all battery types, including those of the drum machines of the most famous.
See the source
Did you find this review helpful?yesno
Cookies help us improve performance, enhance user experience and deliver our services. By using our services, you agree to our use of cookies. Find out more.